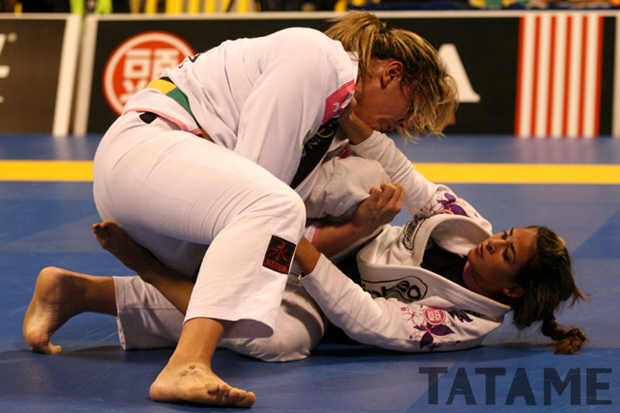 Gabi Garcia and Bia Mesquita recently fought in the final of the Pan Am and Gabi (who is a good 30 kilos heavier) won again convincingly. The pair have fought many times in the past, however this last time, a bit of controversy arose when Gabi accused Bia of taunting and disrespecting her. Here is what both BJJ players had to say about the incident in a conversation with Gracie Mag. we’re already looking forward to them meeting at the Abu Dhabi World Pro…

How was this fight with Beatriz in another absolute final?

I always fight with her. And I had always submitted her in them, but lately she seems to be always seeking to keep our fight tied at 0-0 so the judges give the win to her. This is nonetheless a strategy. It just depends on me not to leave the fight as a draw. I know what her game is, and the good thing is that every time I got the victory. I hope it stays that way.

Were there complicated times during the fight?

Yes, when I lost my head in the absolute final with taunts and disrespect from the opponent. That was actually my worst moment! There, I think I’ve learned to keep my head on straight and not lose control. Fabio Gurgel even scolded me for paying attention to her provocations. She wants me to lose control of the fight, but that just isn’t cool. I learned that even disrespected, I have to keep my mouth shut, and not pay attention to someone who doesn’t deserve it.

How was the absolute final with Gabi Garcia?

It’s always a tough match. She is at least twice my size. Gabi is winning all absolutes, but I always go for it with confidence in my game and well determined. I think it is working because although I didn’t win, I’m one of those who have been improving against her, I was fighting well during the ten minutes without being submitted. She passed my guard and then I was able to recover. It is a result of a lot of training of hip escapes, the best way to reset the guard. They are supernatural abilities (laughs).

Gabi told GracieMag you taunted her during the fight. What happened?

Look, I didn’t do anything to provoke her or to take her concentration away. I fought to have a good performance, and trying not to get hurt, even with a punch and an elbow that she gave me, perhaps thinking it would make a difference. My warrior spirit would not let me be affected, even with my mouth bleeding and surviving under such weight. But the absolute is like that, I’m always prepared for the worst. I really didn’t understand, and I wonder: what have I done? I really don’t know. I think her problem was not being able to submit … At the end of the fight, the referee led us to greet and I was cordial and polite as she turned her back on me and was talking nonsense. In my opinion, immature attitudes are completely unworthy.

In Abu Dhabi, you can fight again in the absolute. What do you plan to do differently?

The training continues, and studying the opponents and correcting the mistakes are part of it. But you’ll see the different aspects in our next fight (laughs). I learned in Pan that the important thing is not always winning. There are times when only the affection and respect of people you know or come to congratulate you outweigh everything. It really is priceless.