Jake Hager On Grappling Match with Jon Jones: “Jon, Come Out Of Hiding, Prove That You’re Still The GOAT” 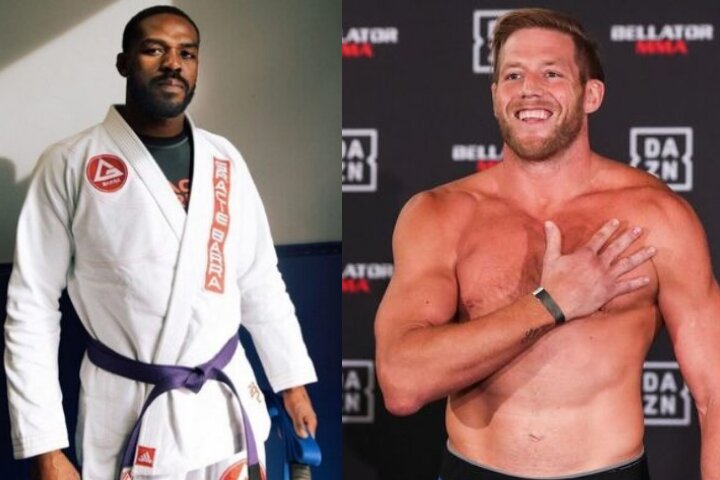 Back in mid-November, Jon Jones took it to Twitter to announce a grappling match against Jake Hager at Fury Professional Grappling, which was to take place on December 9. However, since then he seems to have deleted those posts – and now Jake Hager is calling him out for backing out of the match.
In a recent podcast appearance, Hager held nothing back:

I don’t know what’s going on. I’m training, I’m ready, as far as I know, it’s on, then it got quiet on his end. I don’t know if he [Jones] saw my resume, and was like: “Ooh this is an Oklahoman country boy, I don’t know if I want to wrestle him.”
Maybe he saw that I wrestle for AEW and he got a little scared. Everybody wants to work for AEW, so maybe he wants to get a job.

Jon, come out of hiding, prove that you’re still the GOAT.

Jake Hager also went down the memory lane to a moment when he was offered to face Jones:

I was at dinner one night and got the phone call from my head coach, Josh Crabtree. And he said: “What’s up, man? I got a great situation for ya. You should say yes before I even tell you what it is.”
Alright, I love Josh, he’s the man. So I’m like: “Yes!” He tells me and I’m still like yes, let’s make it happen.

However, Jones didn’t use Hager’s and Hager’s company name right in his posts afterwards, so Hager went on to correct him:

First of all it’s @AEWonTNT and undefeated @BellatorMMA heavyweight Jake Hager, secondly no terms have been discussed or contract signed. We can talk if terms are right. https://t.co/6ScRt0gNmj

Hager reflected on that point as well:

So, as far as I know, we were waiting [for] the negotiations and everything. He jumped the gun a little bit, made that Twitter announcement, we hadn’t had anything signed. I know my response was harsh, but you got to get my name right and my company name right.