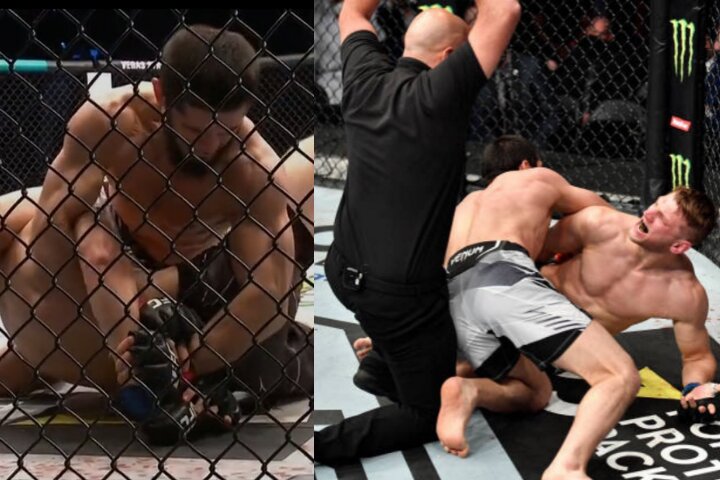 Islam Makhachev and Dan Hooker went to battle at UFC 267, and it was Makhachev who ultimately emerged victorious; submitting Hooker just three minutes in, with a superbly set up Kimura.
However, the match should’ve been called to an end much sooner, as Hooker was verbally tapping out! Though the referee didn’t hear him because of the noise – Makhachev explained what happened in a post-fight interview:

I think he, himself [Hooker], underestimated my finishing ability. I went for a Kimura and he started backing up, trying to defend against it. And at that moment – you can rewatch it – Khabib told me to step over his head.

As I did, both of his hands were under me, and he started screaming: “Stop! Stop it!”
I could hear him, but the referee didn’t, because of the noise the crowd was making at that moment. I have even seen a picture of him being annoyed with the referee who didn’t stop it on time.

And I really hope that he isn’t injured. If he is, I am wishing him a speedy recovery.

Makhachev continued to elaborate how he now deserves a title fight, much due to his grappling prowess:

I knew when I take him [Hooker, during the fight] down, I can finish anyone. My grappling level is better than everyone in the division. MMA ground game, I have the best in the division.
Now it’s time. This guy is #6 [in the UFC]. Now I have to talk. Nine fight win streak. I’m ready for a title fight. It doesn’t matter. This division is a little bit sleepy. I woke up this division.

GIVE THIS MAN HIS RESPECT!!!@MakhachevMMA with the round 1️⃣ kimura.