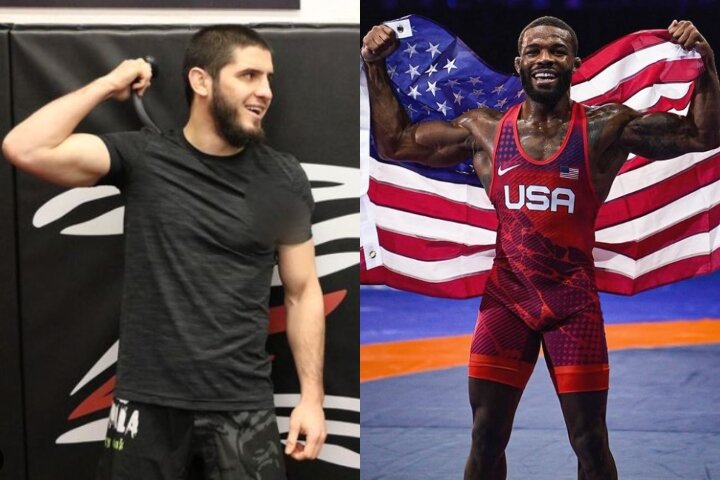 Islam Makhachev recently earned the UFC lightweight title, after submitting Charles Oliveira at UFC 280. So, among other things, it’s “safe to say” that Makhachev is an outstanding grappler… Who also believes that he could outwrestle Jordan Burroughs – a freestyle wrestling Olympic gold medalist.

He claimed that all the way back in October 2021, in an interview with Daniel Cormier:

Bring some Olympic level guy to AKA, wrestler, like Jordan Burroughs. It’s gonna be a good match for me… Please brother, this guy, I respect him – but he only [goes for a] Double Leg.

Never forget Islam Makhachev telling DC how he would beat Jordan Burroughs in a wrestling match if it happened at AKA pic.twitter.com/zAnexMmAwt

In a recent YouTube video, Cormier mentioned that Islam still believes that he could beat Burroughs in wrestling… Which Cormier isn’t so certain about:

That guy [Makhachev] is so hard to take down once you get to his legs; almost at a point that he almost invites you.
And now, he’s lost his mind when he says: “Bring Jordan Burroughs and all those guys.” Because those guys would tear him apart.
I don’t care how good he is at wrestling in MMA, Islam ain’t beating Jordan Burroughs. And I tell these guys that all the time.

Nevertheless, the “Makhachev era” is upon us:

This guy is a good wrestler, and this guy is on his way to becoming a very dominant [UFC lightweight] champion.
The Islam Makhachev era is upon us now, guys. Strap in.