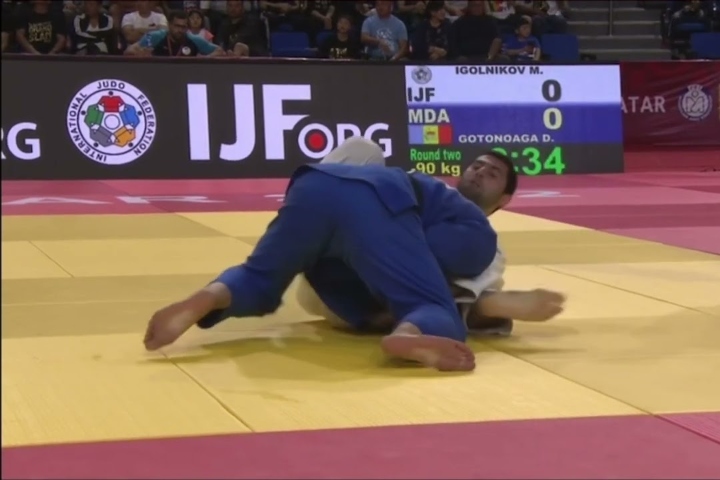 The Peruvian Necktie is one of the most unexpected chokes in Brazilian Jiu-Jitsu. And it’s for that reason that BJJ athletes, as well as Judokas, love to go for it!
For instance, back in 2013, Yarden Gerbi became the first Israeli Judo athlete to win a world title; doing so by choking out her opponent with a Peruvian Necktie-type choke.

Unfortunately, the International Judo Federation (IJF) subsequently banned this Peruvian Necktie Choke technique from competition, arguing that it’s dangerous because of the use of the jacket skirt. However, Judo players found ways around this rule, devising two ways to apply this choke without using the jacket skirt at all.
According to Judo Crazy, here’s how they went about it:

One approach involved a headlock that trapped at least one of uke’s arms, making it a kind of sankaku but with the arms rather than the legs. (It’s also commonly referred to as kata-sankaku). After securing that lock, tori would then place on leg on the back of uke’s head and the other on uke’s back; much like how Gerbi did her choke. Since this did not involve the jacket skirt, it was deemed legal.

Nevertheless, it’s apparent that both of these variations are now banned by the IJF as well. According to the Arab Judo Referee YouTube channel, the Peruvian Necktie technique has been discussed in a referee’s meeting ahead of the Hungary Grand Slam; where it was decided that it would no longer be allowed – with a “matte” being called when it’s applied.

At the moment, the IJF has not released any official statements about this issue.