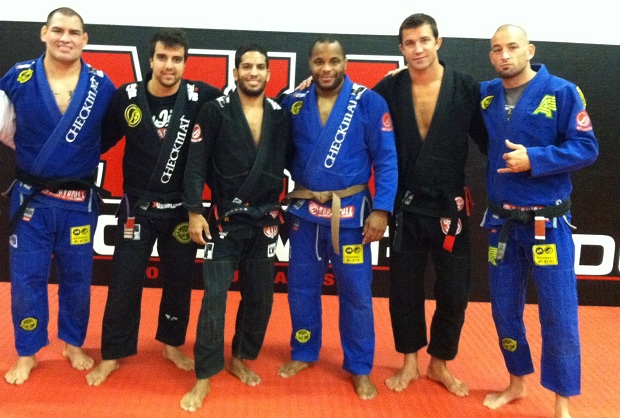 Exactly 16 days from his 3rd fight against Junior dos Santos at UFC 166, Cain Velasquez received, on Thursday (3), a black belt in Brazilian Jiu-Jitsu from Leandro Vieira (Checkmat), responsible for sharpening his ground game in AKA. The UFC heavyweight champion was promoted, as well as his team mates Daniel Cormier , promoted to brown belt, and Luke Rockhold , promoted the black. Rockhold has actually competed extensively in the Gi and was World No gi champion at purple as well as world champ at blue belt. AKA was up until a year ago under Dave Camarillo for BJJ, but then Chackmat took over.

“It was pretty cool. Every Thursday we do a Jiu-Jitsu workout at the Academy. The promotion was on the 9th, but the UFC wanted to film, anticipating the date. It was something that we could no longer wait for as Velaquez is very good, and his Jiu-Jitsu has really evolved. He is much more confident now on the ground. Cormier until my arrival to the gym two years ago, did not train in the kimono and had not even been graded. At the time he handed me the white belt and asked me to tie around his waist. He never had a grading, although he has very good Jiu-Jitsu. He received his brown belt. Luke is very good too, everyone was deserving changing belts, “said Barbosa to tatame