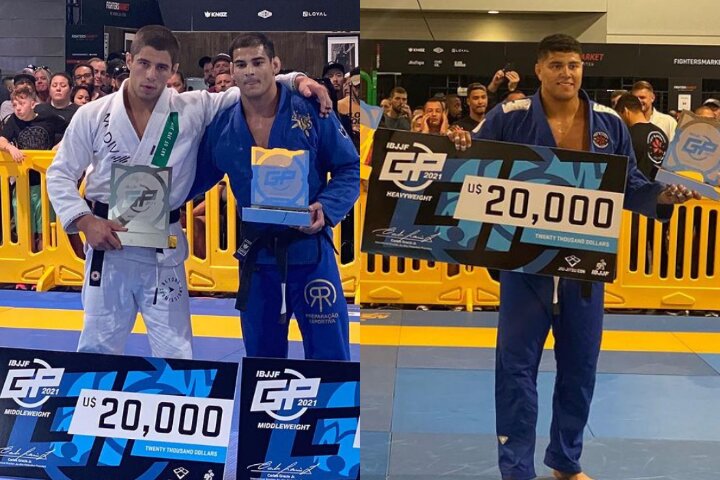 One of the most exciting grand prix events took place this weekend, in Las Vegas (Nevada). The IBJJF featured two grand prix tournaments – the middleweight and heavyweight one – with each carrying a $20,000 prize for the winner.
Here are the results.

The middleweight IBJJF Grand Prix featured Otavio Souza, Jonnatas Gracie, Renato Canuto, and Tainan Dalpra. In the end, it was Dalpra who took home the $20K prize.
He beat his first opponent with a 7-2 score, for the most part by using a variety of sweeps and pressure.

Then, in the finals, he went against Jonnatas Gracie – his former teammate, who beat Otavio Souza in the second semifinal match of the night.
In their battle for gold, Tainan initially worked for a backtake after pulling guard. Gracie recovered and came back up to his feet, eventually pulling guard himself. However, Tainan started taking advantage of the situation and started moving around Gracie’s legs, taking his back and choking him out with around three and a half minutes into the match; gaining the victory and moving his black belt record to 32-1.

Fellipe Andrew, Mahamed Aly, Gustavo Batista, and Victor Hugo competed in the heavyweight grand prix. In the first match, Hugo who won against Batista via penalty that his opponent received for an illegal grip early in the match.

Then, in the finals, Hugo battled Mahamed Aly – who beat Fellipe Andrew in the semifinal match. Hugo pulled guard immediately at the start of the match. He then set up a Straight Ankle Lock, which Aly was able to defend for almost a whole minute… However, Hugo slowly adjusted his grip, and got the tap with more than two minutes remaining in the match.