Gordon Ryan Reacts to Kaynan Duarte’s WNO Loss: “This Is An Embarrassment To Our Sport” 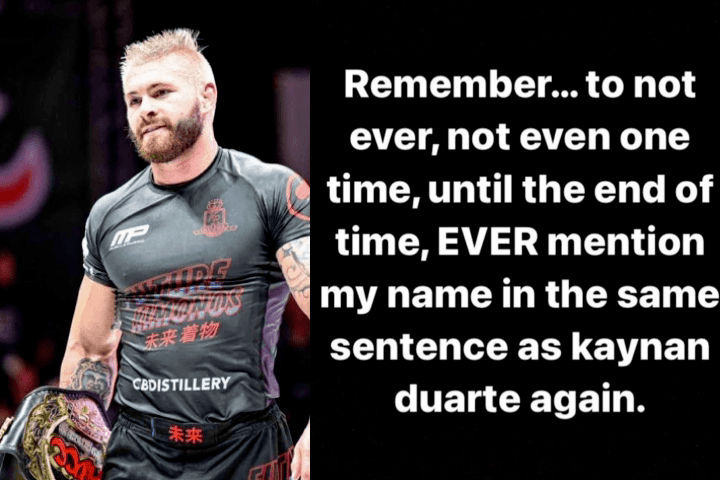 The first finals match of the previous weekend’s Who’s Number One (WNO) Championships was a heavyweight bout between Tim Spriggs and a strongly favored Kaynan Duarte. And, well, the end of the match saw a finish that not a lot of people expected – Spriggs won via Heel Hook finish.
Check out how that loss happened here.

Gordon Ryan was critical of Duarte’s performance, calling it “an embarrassment to our sport”; emphasizing that Kaynan lost to an athlete who trains Jiu-Jitsu as a hobby:

This is an embarrassment to our sport and shows how unprofessional it is. In Timmy’s post match interview he clearly stated that he retired from competition and was training 3 times a week. Tim made no money in his career, meaning that if he doesn’t make money through jiu jitsu, he has a real job, which would explain why he only trains 3 times a week.

So think about this for a second, A F*CKING HOBBYIST TRAINING 3 TIMES A WEEK JUST EASILY SUBMITTED THE 2ND BEST GUY IN THE WORLD WHO EVERYONE SAYS IM RUNNING FROM 😂😂😂. How f*cking embarrassing is that to think about?
Everyone says I’m over critical when I say everyone sucks, but they just simply do. I watch these matches and just see mistake after mistake, especially in the heavier divisions. When you have the best guy in the world losing to someone 3 divisions lighter and the random hobbyist, you know your sports a f*cking joke, and that’s sad because I’m part of this sport.

Ryan also pointed out that he’s happy to be paving the path for young athletes’ careers in BJJ:

I also want to say I’m very impressed with the new found integration of leg locks into the woman’s divisions. And most of all, I’ve been saying for years that my goal is to have young athletes in this sport be able to make livings off jiu jitsu. And I’m happy to see the 2 @ruotolobrothersjiujitsu twins who are under 20 years old take home a combined 65k dollars for a weekends work.