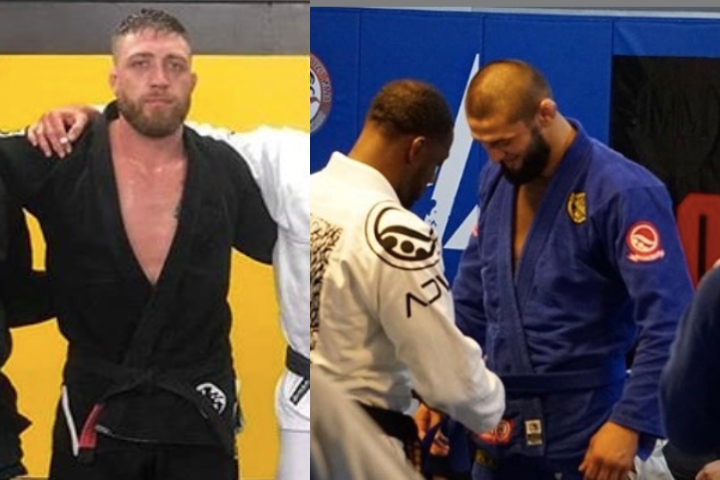 At today’s press conference, they have made it into a battle between an experienced black belt (Meerschaert) and a newly promoted blue belt (Chimaev).

“If you choke me out, I’ll find a black belt and give it to you – how about that?”

“If I choke you out, you are finished with this sport,” Chimaev said.

And Meerschaert promises to humble the young upstart.

“If I double-leg you, do I get, like, a wrestling trophy or something?” he quipped.

“You lose you your fights. You are like friend of Conor. What is his name? Artem Lobov. How many times you lose your fights?”

“You think you’re a black belt?” Chimaev said. “Jack Hermansson, he doesn’t have a black belt. Why did he choke you out?”

“Some times you lose when you fight tough guys, man,” Meerschaert said.

“I have blue belt,” Chimaev said. “I’m going to choke you out. … You’re about to give your black belt to me.”

“Somebody, how like a white belt choke you out? How are you going to be a black belt? For me, it’s not possible, because I did hard work to get the blue belt for three years,” Chimaev said. “How did he get that. Imagine how many years I have to take to get that.”

Meerschaert is a master at submission. He is tied with Antonio Carlos Junior and Demian Maia for the most submissions in the middleweight division.

“I am tied for the most submissions in the middleweight division,” Meerschaert replied. “So yeah, I think I deserve that black belt.”

Chimaev, a lifetime wrestler, recently started to train BJJ in the Gi at Allstars Training Center in Stockholm, Sweden. His BJJ instructor Alan “Finfou” Nascimento, a multiple-time BJJ world champion, felt it was time for Chimaev to be awarded his blue belt in Brazilian Jiu-Jitsu: