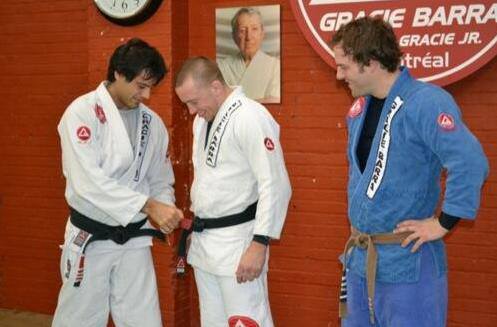 UFC welterweight champ Georges St. Pierre got a stripe on his BJJ black belt from Gracie Barra in Montreal today. Congrats to the champ and maybe he will show case some of his finishing jiu jitsu skills in November when he faces number one contender Johny Hendricks.

St Pierre has a rich martial arts history. He started learning Kyokushin karate at age seven from his father and later from a Kyokushin Karate Master to defend himself against a school bully. He took up wrestling and Brazilian Jiu-Jitsu after his karate teacher died (at this point he also trained in boxing). Prior to his fight with B.J. Penn at UFC 58, he trained at the Renzo Gracie Jiu-Jitsu Academy in New York City. St-Pierre received his brown belt in BJJ from Renzo Gracie on July 21, 2006. In September 2008, St-Pierre earned his black belt in Brazilian Jiu-Jitsu under Bruno Fernandes.