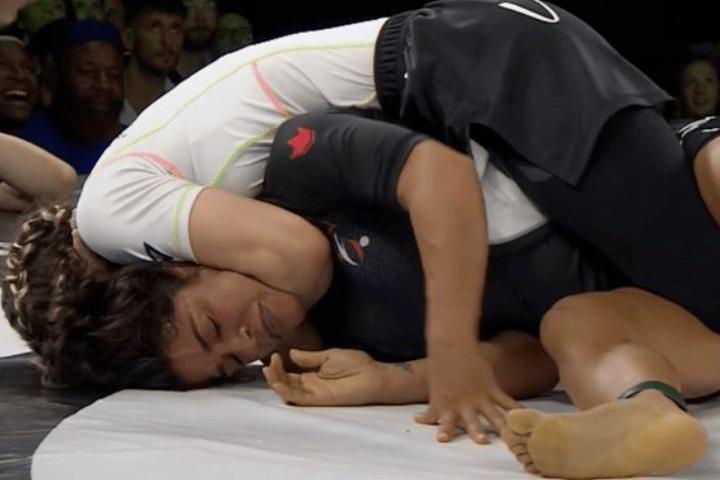 THE FLOW OF THE KELLY VS. AMARANTE MATCH

The match started out with Kelly immediately pulling guard, trying to use her butterfly hook to elevate Amarante. As she came out on top, Amarante took an opportunity to go for an outside Heel Hook. However, Danielle escaped and then came up on top yet again to work on her guard pass, all the while Sofia maintained a reverse De La Riva Guard.
Amarante then transitioned to the X-Guard, rolling through for a Leg Lock attempt. Her opponent escaped from it as well.

As the match unfolded, Danielle continued trying to pass Amarante’s guard. She went for a Toe Hold with around four minutes to go in a match, but Amarante defended successfully against it. Then, Kelly did a cartwheel over Amarante’s legs and locked in a Kimura grip on her. She transitioned to a leg attack yet again when Sofia defended, which led to Danielle trying to pass guard again.
When she stacked Amarante – who inverted and went for another leg attack – Kelly locked in a Head & Arm Choke, trying to sprawl her way out of Amarante’s hold on her leg. That opened up an opportunity for her to take the back, put one hook in and sink in a Rear Naked Choke; which forced Sofia to tap with one minute and three seconds remaining in the match.

You can watch the submission here:

Kelly gets the finish! We close out the first Fury Pro Grappling with a submission from rising star Danielle Kelly! pic.twitter.com/cM0fWiyL0y