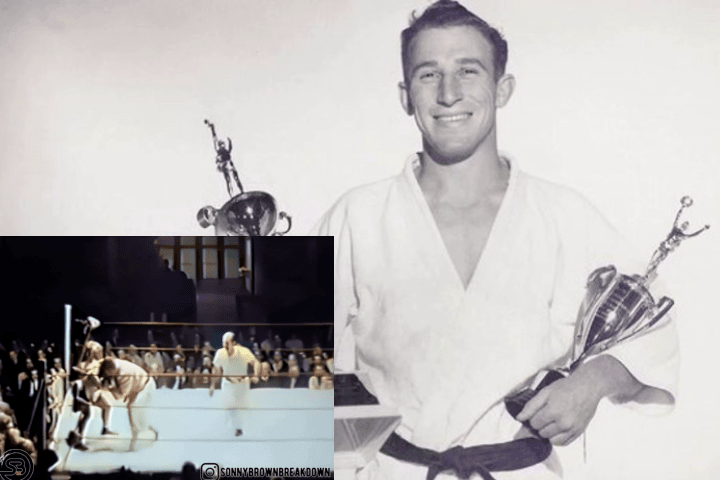 Do you know when the first televised mixed martial arts match took place? It was in December 1963! More specifically, it was a fight between the “Judo” Gene Lebell and a boxer named Milo Savage.

Before the match, in August 1963, columnist Jim Beck published an article called “The Judo Bums”; which mocked Judo and praised Boxing. The Sonny Brown Facebook page detailed the contents of this article, the subsequent controversy and results of the match:

As Jim Beck put it: “Judo … is a complete fraud … Every judo man I’ve ever met was a braggart and a showoff … Any boxer can beat a judo man.
Judo bums, hear me one and all! It is one thing to fracture pine boards, bricks and assorted inanimate objects, but quite another to climb into a ring with a trained and less cooperative target. My money is ready. Where are the takers?”
Beck set the challenge for any takers, and Gene Lebell would accept the offer. Gene LeBell is now a legend of the sport, and I will write more about him in the future, but he was pitted against accomplished boxer Milo Savage in this fixture.
The promoters set the rules for 3 five minute rounds, Savage was to wear a Gi top over his boxing attire, and Gene LeBell was not to wear gloves or shoes. All techniques were allowed except for kicks, and a referee stoppage or a 10 count would decide the winner or the referee if it went to decision.
Pre-fight controversy regarding the equipment included a Gi that was too tight from Savage and the usual suspicion of tampered or loaded gloves, but the fight went ahead as planned.
Eventually, Gene got the bout to the mat and choked Milo Savage in front of his home crowd; causing them to launch rubbish in his direction. Also, the crowd was unfamiliar with submissions and had figured that Gene could have irreparably harmed Milo.

Check out the match here: