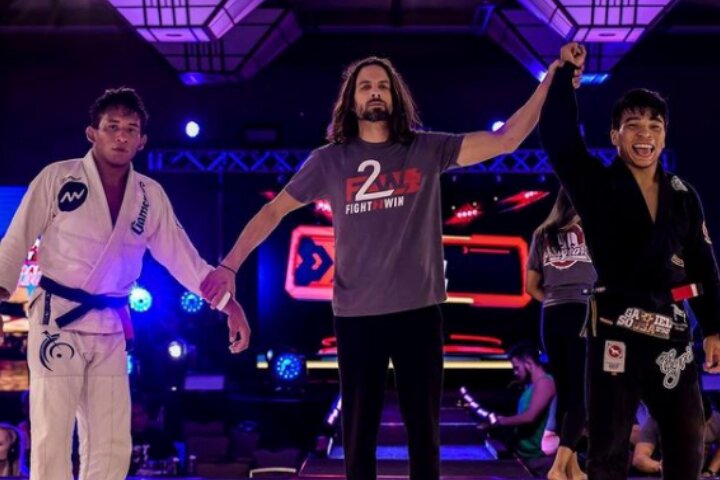 The Fight To Win (F2W) 181 event was nothing short of what it has been anticipated to be – an extremely exciting one! Having taken place on Sunday, August 15, it featured a number of high-paced matches; with the final matches being for the welterweight title (Marcos Torregrosa vs. Angel Lopez) and a main event between Gabriel Sousa and Lucas Pinheiro.

In the welterweight title match, Lopez pulled guard and Torregosa worked to pass it into Side Control. After he succeeded, he shifted to Knee On Belly and then to Mount; working to set up a Cross Collar Choke. However, Lopez was defending with much vigor.
At one point, as Torregrosa tried to trap Lopez’s arm with a lapel, Lopez freed his arm and bridged in an attempt to escape – but ended up in Torregrosa’s Mount position again. Then, Torregrosa passed the lapel grip around and stepped over Lopez’s head to get the choke; getting the tap and bringing home the masters welterweight Gi title.

With around 120 seconds to go and both athletes back to their feet, Sousa pulled guard again and attacked Pinheiro’s leg – who ultimately managed to escape. Then, Sousa got back up to his feet again and sprawled on top of his opponent, then going for the Straight Ankle Lock with around 30 seconds to go in the match. He was unsuccessful however, leading to Pinheiro’s takedown attempt.
With around 10 seconds to go, Pinheiro pulled Closed Guard; and at the very last second of the match, Sousa pulled Pinheiro up and slammed him to the mats.

Sousa was declared the winner by unanimous decision. Take a look at the rest of the results on the Instagram post below: