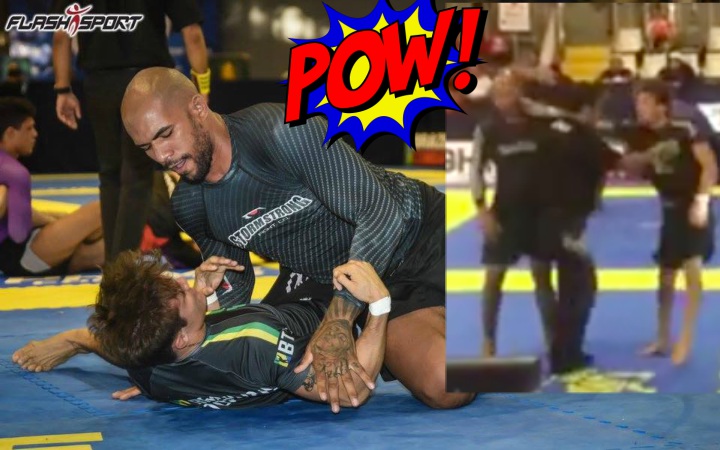 An unbelievable moment from last weekend’s Rio Open. Erberth Santos was attacked by Alexandre Vieira. Santos was dominating the match and submited Vieira. After the match, Vieira insulted Erberth and slapped him twice. Erberth Santos kept his cool and walked away.

Alexandre Vieira later wrote a comment saying that Erberth had elbowed him three times during the match. He also ended up apologzing on His facebook profile.

Santos has been involved in many incidents on and off the mats in the past, and is generally known as the bad boy of Jiu-Jitsu but he seems to have matured and changed for the better in the recent year.

Erberth later posted on his Facebook about the incident, and he took the high road, stating that he wanted to put this behind him:

Translated from Portuguese by Bing:

Guys, about what happened yesterday in fall river, I wouldn’t want to prolong a lot about this subject, because I know that we should be united by the growth of Jiu-Jitsu, many children reflected in people and I learned that we are examples for many of them.
I come from past very difficult and that is no excuse not to be better.
Jiu-Jitsu is a contact sport, the competition don’t control my explosion or my strength, I’m determined to bother and finalise my opponent, I’m well heavier than the Alexandre Vieira and we all know that that can hurt is in training or competition. Anyway, I know he must be arrependito have assaulted me, but I don’t want the judge, after all I’ve made a lot of mistakes in this life and I don’t want anyone to feel the pain of being judged by people on the internet, leave that to the charge of the ibjjf / Cbjj.
So ball forward, of my part I don’t take sorrows, I know that hot head that we are capable of doing and talking nonsense.
It’s life that follows, I thank you immensely to God and to all who are with me, the affection of the fans of my team almeida jj and all my friends that make a difference in my life.
The Jiu-Jitsu promotes changes and I want to be an example to the young people who want to change for the better!
Next stop floripa fall!
OSS!