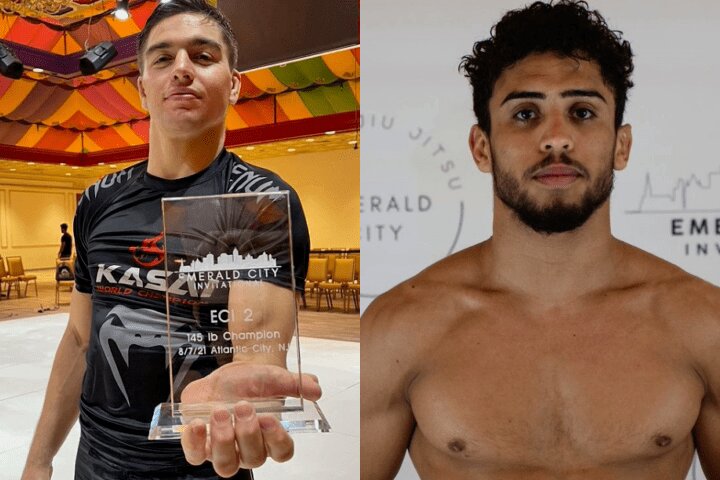 The Emerald City Invitational 2 tournament just took place… And boy, was it full of action! It featured a 145-pound championship bracket, from which Gianni Grippo emerged victorious; as well as a number of superfights.
Here’s what happened at the championship’s finals match.

Maciel got a Single Leg against Grippo at the start of the match, after which Grippo began playing his signature guard game. Grippo went an unsuccessful leg attack, after which Maciel resumed to passing the guard. Grippo defended against these attempts successfully for some time, but Maciel managed to pass eventually and solidify his North-South position.
However, with just 45 seconds remaining in regulation time, Grippo created space – leaving Maciel with futile attempts to pass guard until the end.

It was Grippo on Maciel’s back for the first half of the first round of overtime. He managed to trap Maciel’s arm and tried to get his free arm underneath the opponent’s chin, but Maciel defended well until time ran out.
In the second half, Maciel immediately locked up the Body Triangle and sunk in the Rear Naked Choke. Grippo successfully defended against the RNC with his chin until the time went out.

The second round of overtime began with Grippo locking in a Body Triangle himself. Maciel almost managed to escape from it, even standing up to his feet in order to shake off his opponent, but Grippo kept tight until the very end.
Maciel took the back once more, getting the Body Triangle yet again. Grippo tried hard to escape, but was ultimately unsuccessful – even though he, at one point, got his shoulders to the mat.

The third round commenced. Grippo, on the opponent’s back, secured the Body Triangle once again. He went for a choke at first, but then transitioned to a palm-to-palm grip – cranking Maciel’s face until the end of first half.
Maciel chose to start from the back once again. Getting it going with a Body Triangle, he went for a Rear Naked Choke – but Grippo got his shoulders free yet again. He rolled with them until he ended up in bottom Mount – thus getting the win via fastest escape time, taking home the title of the Emerald City Invitational 2 championship.