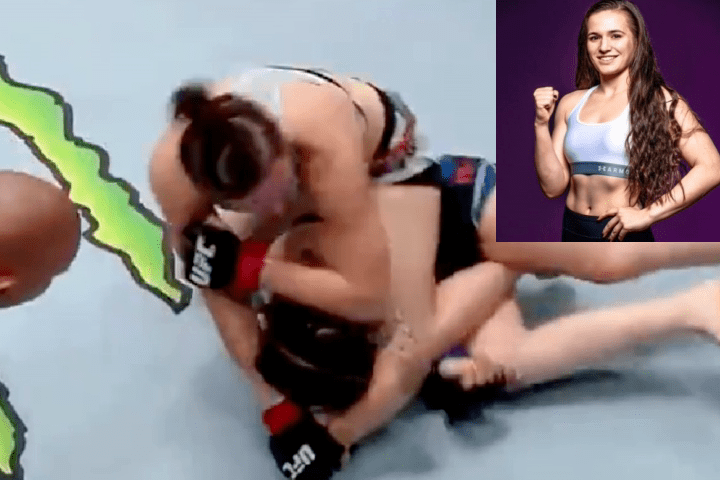 Think what you want, but if you use Brazilian Jiu-Jitsu as a base for your MMA career – while, of course, developing other skills with vigor – you’re going to find success. And that’s exactly what the case has been for Erin Blanchfield, a 22 year old BJJ black belt who won EBI 12 as a purple belt… And who won her first UFC fight!
She faced Sarah Alpar in the prelims of UFC Vegas 37.

Going to work on the ground! 🤛

Blanchfield was mostly on the defensive in the of the fight, evading a barrage of punches thrown by Alpar. However, after she managed to drive Alpar towards the fence with a kick, Blanchfield kept her cornered with a number of her own strikes. Then, Alpar went for a takedown but her opponent managed to stay on her feet.
After throwing some more strikes and knees, and with around 2 minutes remaining in the round, Blanchfield tripped Alpar to the canvas. She held Side Control, then transitioning to Mount in order to deliver even more strikes from there. Alpar managed to recover and establish Half Guard; even though her opponent continued raining down punches all the way to the last seconds of the round.

Erin began the second round by being even more attack-oriented than beforehand. She kicked Sarah in the head and then connected with a powerful jab. Sarah attempted to keep her opponent at a safe distance, but Erin kept her aggression going. She threw a combination of strikes, clinching up and then taking the fight to the ground yet again.
She got in one hook and started throwing knees to the body. Sarah tried to defend herself, but her opponent continued delivering head strikes. Then, with less around 90 seconds remaining in the round, Erin got Sarah fully on her back and finished the round with vicious ground and pound.

Going into the third round, Alpar didn’t seem discouraged by her earlier performance. She exchanged a number of strikes against her opponent, but Blanchfield cornered her against the fence again. The two fighters clinched up, with Alpar receiving numerous knees to the body and heavy elbow to her head.
Blanchfield got a takedown, passing into Side Control; to which Alpar responded by turtling up – getting her back to the cage. However, this defense lasted only for a short while, as Blanchfield flattened her out yet again… Delivering even more punches in the process.

The third round ended with Blanchfield passing to Side Control, then Mount, and then with a Back Take which was accompanied with a barrage of strikes. Blanchfield was declared the winner by unanimous decision.