Drysdale: ‘Rener Gracie is Dragging Helio’s Legacy in The Mud’ 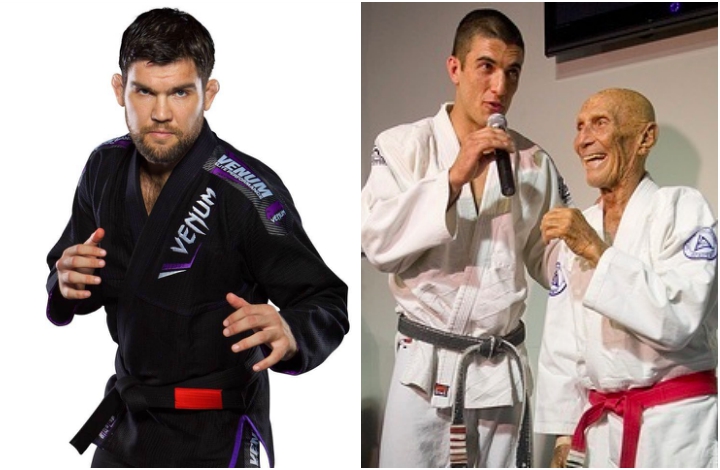 Rener Gracie, love him or hate him, you can’t deny that he’s a brilliant businessman.

Rener Gracie together with his brother Ryron, is the creator of the controversial Gracie Online University. He is Rorion’s son and grandson of Grandmaster Helio Gracie.

Gracie University was launched after the death of Helio Gracie.

The online Jiu-Jitsu university follows the example of proper Universities which offer their courses online to students. It is a whole system that works from a distance, with lessons, reviews, tests and final exams. You can receive a “technical blue belt” in the mail after having demonstrated a set of basic techniques in front of a camera. You do not need to roll (live sparring). The rest of the belts are given by an instructor in person.

Gracie University has more than 119,000 active students (source)in 196 countries offering tailored self-defense programs for men, women, and children. At an average cost of 35$/ month, that means an estimated massive total annual revenue of between 20 to 50 million dollars (since not all members are paying- there is a free trial).

With the growth of Gracie University, the controversy over the belt system in Jiu-Jitsu continues. Many prominent members of the BJJ community have publicly criticised Gracie University: Rickson Gracie,Royce Gracie, Kron Gracie, Murilo Bustamante and now Royler Gracie.

Rener recently made a Gracie Breakdown of his uncle Royce Gracie’s controversial win over Ken Shamrock last weekend. Rener said that Royce did hit Shamrock with a groin strike, but that it was Shamrock’s fault for having a late reaction and that’s why the referee didn’t intervene.

Royce’s camp (including Royler) maintained that Royce did not hit Shamrock’s groin. Royler Gracie didn’t appreciate the breakdown, and he left a comment on the Gracie Breakdown Facebook video. The comment has since then been removed. 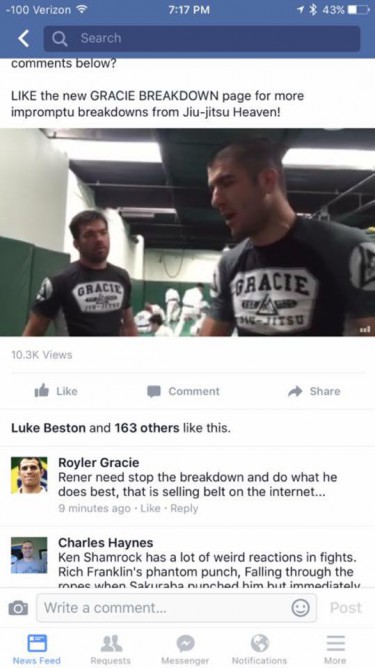 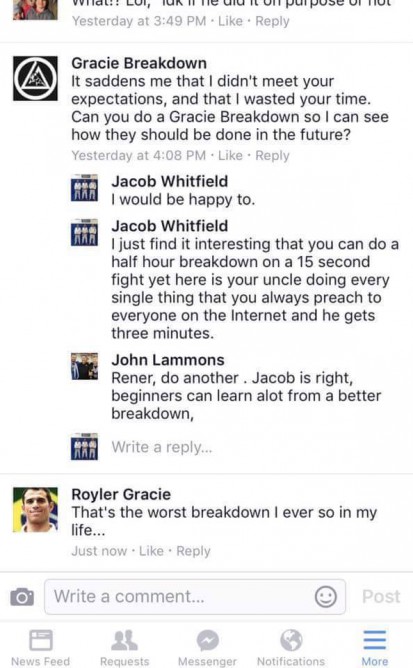 I am so happy i am not the only one who feels this way. To see @roylergracie stand up for his family is truly refreshing in this day and age where money and popularity seem to have kidnapped the essence of everything Jiu-Jitsu stands for: humility and dedication. I remember helio gracie wearing a blue belt to protest people getting their black belts too soon… If only his grandfather could see his own grandchildren using his name, image and legacy to make a quick buck… He would feel shame. This is not a personal attack on @renergracie i never met him. He should give it some thought and stop dragging his grandfathers name and legacy in the mud. There are ways to make money in this world. Selling out the art of Jiu-Jitsu should be condemned by all who love it.