De La Riva Female Students Accuse the Team of ‘Machismo’ After Being Kicked Out; Academy Responds with ‘Misunderstanding’ 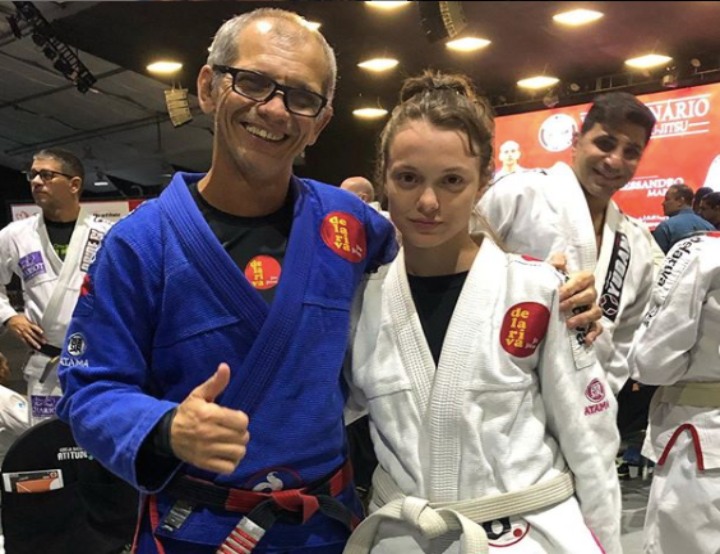 Back in April, news broke out of BJJ world champion Claudia Doval accusing her former instructor, BJJ legend Ricardo De La Riva of sexual abuse. This is what caused here to leave the De La Riva team 2 years ago.

A new controversy happened this morning. Women who trained at the De La Riva academy claim that they were “expelled” for no reason and informed only that there would be no continuity of mixed classes (Gi and No Gi).

De La Riva Blue belt Magali Ferreira Gomes decided to post about this on Instagram and made an outburst by making the case public. In conversation with TATAME, she said that the academy’s announcement came through a meeting on the Zoom platform and, later, in a message via WhatsApp ( which you can check below ).

Here is his message translated from Portuguese:

As was already communicated through Zoom at the meeting on 06/26, we inform that there will be no mixed classes (jiu-jitsu and no-gi). If there is a possibility in the future, exclusively female classes will be opened. If you have values ​​to receive, please contact us through this phone as of 06/29 for the settlement to be made.

The message was leaked by some of his female students who were infuriated:

Reaction by one of his female students:

A post shared by Martial Artists Against Racism (@martial_artists_against_racism) on Jun 29, 2020 at 2:23pm PDT

De La Riva black belt Sabrina Savi, on the other hand, cited the team’s lack of clarification when informing the decision to end mixed classes: “It was a cold WhatsApp message, strictly commercial, without any justification. The message did not mention that they would be available for further clarification, but only for me to seek reimbursement of what I had already paid for classes that I would no longer have available ”.

Altogether, there were about 15 women who were part of the team of students of the team De La Riva in Copacabana. The athletes told the report that they were always treated with “respect” inside the gym, but blue belt Magali claimed that this was a case of “extreme machismo”.

TATAME sought out Ana Beatriz Mountary Pimenta, a lawyer for the De La Riva team who issued a statement saying that it was all a misunderstanding:

Check out the official note from the De La Riva team in full:

“We reiterate that mixed-sex classes have not been prohibited. And that what is new in the academy’s and class format is nothing more than projects that seek to improve all students. In this current phase of non-contact training sessions, we will try to group together the maximum number of women in a single class so that we may provide specific exercises directed to each biotype.
The objective is to stimulate the female public to participate in the sport and be part of the team, aggregating both expertise and experience, in a safe and respectful environment.’
Marcelo Garcia is a 9-time World Champion and known for getting to the back and finishing with the rear naked choke, even against much bigger opponents. This four-part system covers taking the back, jumping back takes, maintaining back control, and finishing from the back. Learn Marcelo Gracia's famous Back Attack System. USE PROMO CODE "BJJEE TO GET 10% OFF.