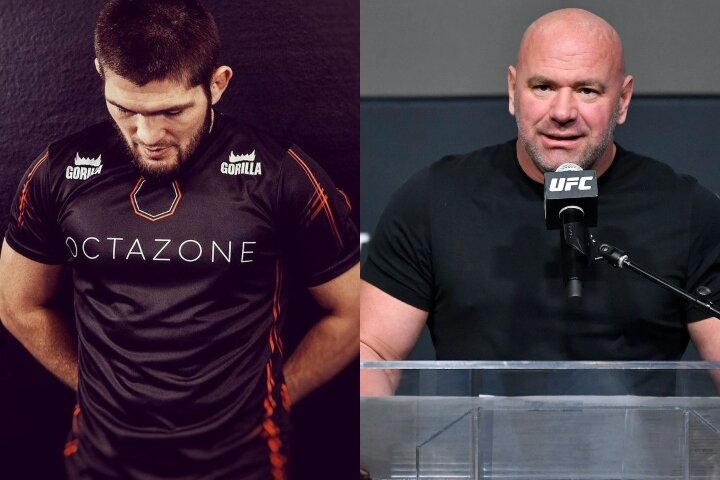 Khabib Nurmagomedov is often said to be the greatest MMA fighter of all time. He earned a perfect 29-0 record, throughout which he beat fighters such as Dustin Poirier, Conor McGregor, and Justin Gaethje.
Following his father’s death and his mother’s wishes, Khabib decided to retire… However, one question still remains: what if?

A legacy like no other! Thank you @TeamKhabib #UFC254 pic.twitter.com/GGqpGjJluR

What if Khabib had continued competing? And what if he returned from retirement, so as to compete one last time?
Numerous attempts were made in that direction, but all have been in vain… Including the latest one, made by the UFC’s president Dana White.

This time, however, White didn’t offer Khabib a return to MMA. As reported by Sportskeeda, he offered him a grappling match:

It’s funny that you asked or it’s weird that you asked me that question, actually [about Khabib’s return from retirement].
I just reached out to him recently to see if he’s interested in something and he was like: “I’m retired, brother. I’m done.” I don’t think Khabib ever comes back.

It was something different, I was trying to get him to do a grappling match. He’s like: “I’m done. I’m retired.”

I think that when his father passed away, that was a wrap for him and he’s just focused on training other guys and helping them become world champions.

This isn’t the best news for the grappling community. Especially after Georges St-Pierre said that he, himself, wouldn’t have anything against competing versus Khabib in a grappling match:

I mean, listen, if it’s well organized… If there is some event that is well organized, is novelty fights or something, then maybe, why not? I’m still in the entertainment world.

I’m in great shape. I train still like a professional athlete. I still get it, you know what I mean?
Even some of the guys, sometimes they tell me: “Ay, are you preparing a comeback?” I’m like: “No, I’m 40 years old.”