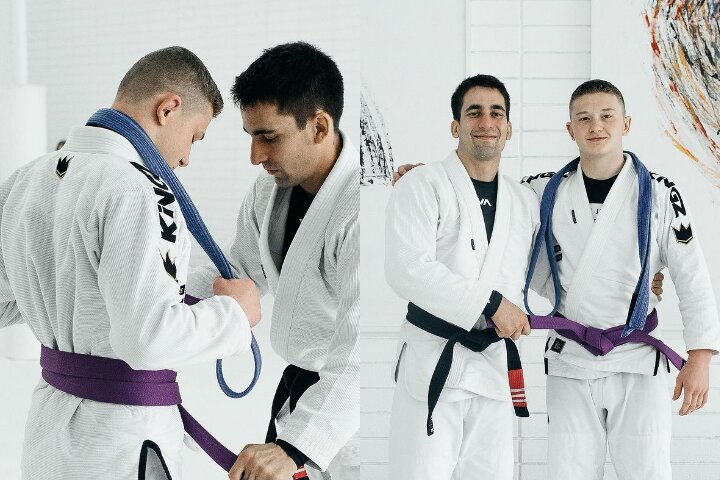 Things just keep getting better and better for Cole Abate. After winning the ADCC East Coast Trials, the 16 year old has now earned his BJJ purple belt!
He was promoted by none other than the Art of Jiu-Jitsu’s very own Guilherme Mendes. Abate was proud to share the news on his social media:

PURPLE BELT – today I was promoted by my professor @mendesbros to purple belt. Excited to take on the new challenges this next stage of my career will bring.
Special thanks to my family, professors, teammates, and supporters. One week until Worlds, can’t wait.

Yup, you’ve read and seen that right… Abate won the ADCC Trials as a blue belt! He explained how he did it on a recent episode of The Grappling Hour podcast – for example, what his mindset and tactics were while going into the finals’ match against Keith Krikorian:

I think a lot of people counted him out in going to the finals… He was one of those guys that we were aware of since the beginning of the tournament… He’s got good wrestling, he’s got good leg locks; so you really have to be on your toes the whole fight. With it being the finals and you getting negatives for pulling guard, I really just wanted to feel out his wrestling.
I felt his grips on the feet. He seemed very experienced on his feet, good wrestling, good level changes, good stances. So what I did is I was able to open up a shot. I got pretty deep on a single leg. But instead of taking the risk and going for the takedown right away, I used that as a chance to pull to my guard without taking a negative point.