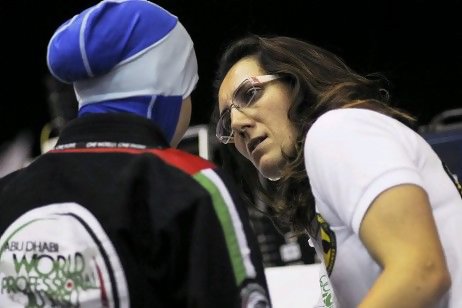 Sports mixed with religion is a explosive subject. When it comes to Jiu-Jitsu the IBJJF has set strict rules over these past years about what you can and can’t wear when competing in one of their tournaments. One of those things is the hijab which is the preferred attire for women in Muslim countries. In this article from thenational.ae, we find out about the campaign that Caroline De Lazzer, the coach of the UAE women’s jiu-jitsu team, is leading a campaign to lift the ban on the hijab, so her fighters can take part in international competitions.

“Shamsa Hassan became the first Emirati woman to win a gold medal in the Abu Dhabi World Professional Jiu-Jitsu Championship, prompting De Lazzer to say it is time for them to compete abroad. However, for the Emirati women to be able to compete, the International Brazilian Jiu-Jitsu Federation (IBJJF) has to lift its hijab ban.

“We have made representations which are now under consideration,” said De Lazzer, a former world champion from Brazil.
“The local organisation in the UAE had special permission to allow the female fighters to compete in the hijab. Competitions outside the country don’t permit the headscarf until it is cleared by the IBJJF.”
De Lazzer argues that women have to wear a garment under their kimonos, the traditional uniform for martial art sports, while men are not allowed to.
“If the IBJJF feel that wearing a T-shirt or a garment for men could be dangerous then it also applies to the female fighters,” she said. “They say an undergarment can get fingers entangled but that is not so in the case for the female fighters.
“Like the women have to wear a garment for modesty, the Muslim women have to cover the hair for similar reasons. In my opinion they should be given the right to wear a safe, Velcro-opening headscarf.”
De Lazzer will submit videos of the recent fights from the Abu Dhabi event to the IBJJF to push her reasoning. “The headscarf is permitted and worn without incident in several competitive sports including taekwondo, an Olympic sport,” she said. “Even Fifa are rethinking lifting the ban on the headscarf, so I am very hopeful we will receive a favourable response.”
All four members of the UAE women’s team wore the hijab.
Hassan said she saw no danger in the modern design of the hijab worn for sports and said: “Anyone who sees it or wants to examine it would understand that there were no dangers of being choked. Anyway, we have left that issue for the coach and she is doing everything possible to have it cleared for us.”
The Emirati women made first round exits on their debut last year in the Abu Dhabi event but this year reached the medal rounds in the championship which concluded at the Abu Dhabi National Exhibition Centre on Saturday.
Hassan won gold from her teammate Najla Mohammed in the white belt 54kg and Eman Mohammed took a bronze in the white belt 60kg.
“Shamsa has participated in every competition in the UAE and won them all,” De Lazzer said. “She never misses a training session and now she needs to participate in more competitions and she will if the hijab rule is lifted, hopefully.
“Our preparation started soon after last year’s championship in Abu Dhabi. We worked so hard and spent the last six weeks in a camp, training six-day week … All that work was rewarded.
“Our preparation for the 2013 championship starts after a week’s rest. We hope to have a bigger squad and more in the medal rounds.”