Chris Haueter on Enson Inoue: ‘Downgrading Yourself is False Humility’ 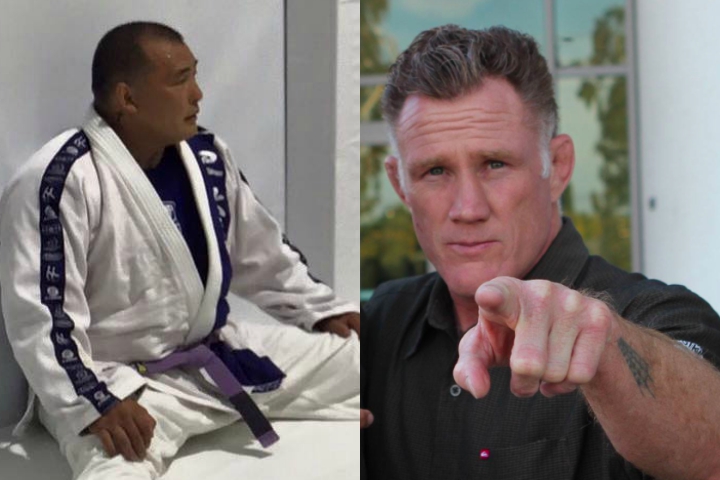 In a startling turn of events he decided to demote himself to purple belt. He announced today:

I know this journey will be long and hard and I want to be real. This is no bullshit nor is it a joke but I’m going to demote myself to purple belt.

I got a black belt 18 years ago and as we all know BJJ is always evolving. I jumped off the BJJ bandwagon 10 years ago and it has pulled far far ahead.

I did the Purebred beginning class again today and again ALL the moves were new to me. Also my body has stiffened so much that I couldn’t even move fluidly.

So I’m officially a purple belt and this is where my journey back to BJJ will continue.

Inoue saw the comments and wrote back explaining his choice:

Lots of people going off on my decision to demote myself to purple belt after 18 years at black.

I hope you all understand that this wasn’t something I decided on a whim. I gave it much thought and I came to this conclusion.

It is something I feel very strong about and if it wasn’t I wouldn’t be giving up a BJJ black belt, something many dream about obtaining.

Maybe I shouldn’t have and maybe I should have just kept the black on because I did earn it but something just didn’t feel right. I felt I was disrespecting the art and most of all I didn’t feel I was being true to myself.

Don’t get me wrong I didn’t demote myself so I can enter tournaments and win a medal in purple belt because I will not compete until I earn my black belt back. Besides I didn’t get back into it to compete but instead for exercise and flexibility. Competing again is secondary and if it happens, it happens.

So there many the respect my decision and many that disagree with it but the bottom line is I did what I thought was proper and what I felt was the right thing to do.

It has been brought to my attention that I may have disrespected the instructor or the group that has awarded me my black belt. By all means the last I wanted to do is disrespect them. I felt the opposite that by respecting them I will refine my technique and the understanding of the art so I can represent them with honor. I didn’t want to go roll somewhere and be so out of the loop that it would put shame on the people who gave me my black belt.

It’s not their fault I dropped off the grid and didn’t keep up with the movement of BJJ. It was my movement and nothing to do with them. I understand that I earned my black belt 18 years ago but let’s be real it’s a different art today. If I were going to close the door of my BJJ career then I would have closed the door as a black belt. But I have chosen to set foot in the BJJ world today, which is almost a whole new art, and I honestly will rank myself as I stand in this era.

It is in no way because I can’t beat the higher belts but more what I feel is an accurate assessment of my true BJJ level today. I plan to train and roll with the likes of John Lewis, Egan Inoue, Steve Roberto, Jeff Starks, Steve Roberto, Jared Weiner, Baret Yoshida, and all my other Purebred black belts and if they feel I can should move up to brown or even black I will do so. Until then I’m purple.

Again no disrespect intended and if I did disrespect anyone, my sincere apologies. With that said, I would also appreciate some understanding and respect on my decision to do what I feel is proper. It is my journey and I just want to be real.