Chimaev’s BJJ Coach: “Every Day Is Like A Jiu-Jitsu World Championship For Him” 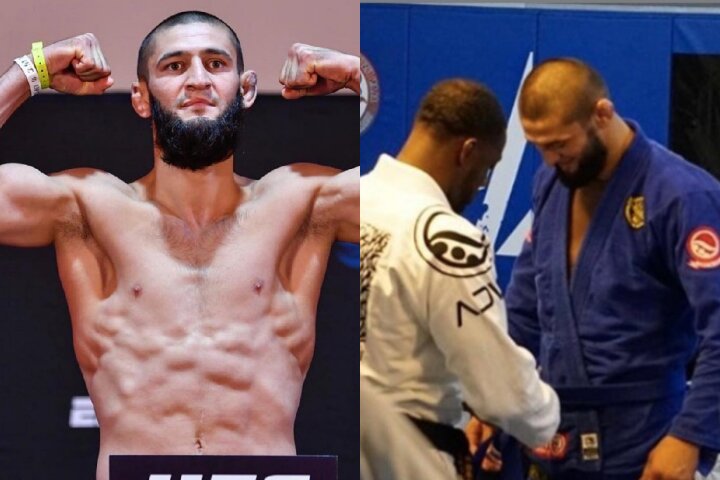 Khamzat Chimaev put on quite a show at UFC 267. In his main card match against Li Jingliang, he completely controlled the pace of the fight and managed to submit his opponent with a Rear Naked Choke. As a matter of fact, while he was taking Jingliang down and then putting him to sleep with his submission, Chimaev was talking to Dana White!
In a post-fight interview, he explained what he was saying to the UFC’s president:

I said: “Dana, I am the king here!” I could’ve taken him down earlier, but I wanna talk to Dana White, he wasn’t watching the fight. He was on his phone or something. Brother, don’t miss my fights. Don’t look at your phone.

Alan Finfou is Chimaev’s BJJ coach who, in an interview for the “Canal do Marinho” YouTube channel, explained why Chimaev is such a good grappler:

When they don’t have a fight scheduled, they [his athletes] need to be training on the ground and, of course, Jiu-Jitsu in the Gi. We cannot forget our essence. When there’s a fight announced, we take off our kimonos and start working for MMA.
Chimaev, for him, is the final of the Worlds (Jiu-Jitsu) every day. In each training session, the UFC belt is worth.

Check out the rest of the interview here (in Portuguese):