Caio Terra:“The 50-50 Is As Much Stalling As The Closed Guard” 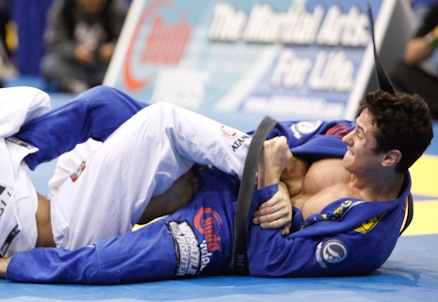 Caio Terra isn’t a blind believer of “old-school” Jiu Jitsu , rather he likes that the sport is developing and that new positions are arising. With every new positions comes new submissions, new sweeps but also new escapes. The problem is that when some people who refuse to evolve, don’t learn to defend or escape the new position, it becomes “stalling”. Caio compares the 50/50 to a closed guard scenario:

“The 50-50 is no more of a stalling position than any other guard in Jiu Jitsu – have you seen entire matches happen within the closed guard or half guard? But these are not called stalling positions.”

“The modern game is really more of a different way to MOVE in positions, people who are used to an older style may never train themselves to be able to move in this way because their muscle memory trained in a different fashion.”

At the end of the day, part of being a complete BJJ player is to know at least how to escape such and such positions.