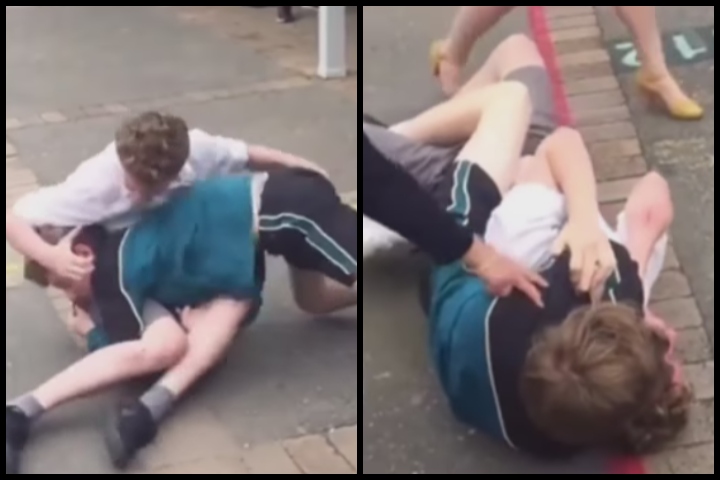 Have you ever been bullied? If so, then you know how difficult it can be dealing with that on a day-to-day basis… Which is why it’s so important for kids to train martial arts, such as Brazilian Jiu-Jitsu: it helps them stand up for themselves.
And that’s exactly what this young man did against a bully who was harassing him.

It’s unclear what happened beforehand. But after some pushing back-and-forth, the taller kid throws a punch. Then, the smaller kid squares off against him – and feints a jab. The bully reacts by raising his arms up… And the smaller kid shoots for a Double Leg takedown.

Having taken his assailant down, the boy starts throwing punches from Side Control. Then, he transitions to Mount. Given the size difference, the taller boy manages to push him away.
The smaller kid doesn’t go for an Armbar, however. (Which is probably a smart idea). Instead, he lets go and lets the bully stand up. Then, he sinks in a quick Rear Naked Choke.

The fight ends, as a teacher comes to separate the students.
Watch the video below – what do you think? Has the boy done as he should’ve against the bully?