Bo Nickal Chokes Out Opponent To Sleep In MMA Debut 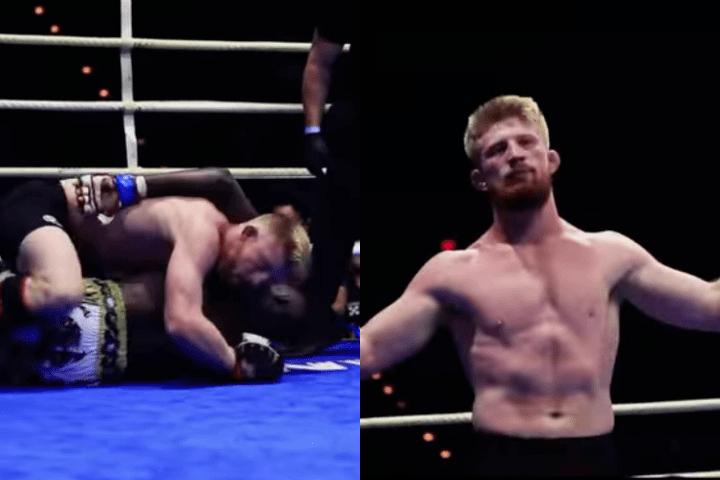 Bo Nickal, the wrestling U-23 world champion & NCAA All American wrestler, has just fought in his first MMA match! The Penn State alumnus made his MMA debut in an amateur fight against David Conley, choking him out to sleep via Arm Triangle.

He started out strong in the first round. Utilizing his grappling expertise, Nickal quickly took Conley down to the canvas. He then mounted him and engaged into ground-and-pound; only to transition to an Arm Triangle and to putting his opponent to sleep by doing so.
Check it out below:

Nickal shared on his social media:

Doing what I’m trained to do. Art of the strangle, brutal but beautiful.

I’m excited to continue this journey with each and every one of you. I will continue to work hard and show out for y’all. Stay tuned for more fight news soon.

BO NICKAL: A NAME TO WATCH OUT FOR

Bo Nickal is a 3x NCAA wrestling champion who, late in 2019, faced against Gordon Ryan in a modified rules grappling match. Gordon was able to bring the fight to the ground 3 times with Scissor Takedowns but was not able to maintain top position since Bo scrambled out of bounds every time. Gordon attempted the scissor a few more times, but this time Bo was wise to it and stuffed all the attempts. Bo played it safe, with a game plan of not taking it to the ground too early so as to not give Gordon a chance to use his Jiu-Jitsu.

Also, late in 2020, Nickal began his Brazilian Jiu-Jitsu journey… In the Gi! Which just goes on to further explain his proficiency with that Arm Triangle.