BJJ World Champ, Bia Mesquita: “If I Fought Ronda Rousey In MMA, I’d Take It To The Ground & Try To Finish By Armbar.” 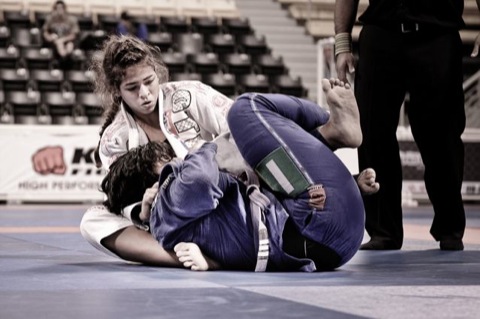 Beatriz Mesquita (Bia) is a Jiu Jitsu black belt under the legendary Leticia Ribeiro. She is one of the greatest grapplers of her generation and has achieved numerous BJJ titles such as the World Nogi Championship and the Pan American title before even reaching her black belt status. Mesquita has also competed successfully in Wrestling and Judo. In an interview with Graciemag, she talked about she would fight Ronda Rousey in a MMA match:

Their weight difference is huge. It doesn’t look like a fair fight to me. Rousey refused fighting Cris Cyborg who is only one weight category above her. So I don’t think she would be willing to face Gabi either, who is two times her size. If I had to bet on somebody to win this fight, even with Ronda’s MMA background, I would choose Gabi. I know the what the pressure of fighting her feels like (laughs). I think it would be more interesting to match up a no-gi fight between Ronda Rousey and a World Brazilian Jiu-Jitsu black-belt champion with no time requirement. Fight finishes with an armbar submission or a tap.

How would you approach an MMA fight with Rousey and defend against her armbar?

I would sharpen up my stand-up, investing in Muay Thai training and wrestling so I could easily take her to the ground. On the ground I can use my Jiu-Jitsu and try to finish the fight with an armbar or get the back, which are both my specialty. That way I think I wouldn’t give her any space to surprise me with her famous armbars.

Have you trained in MMA at all, and do you desire to fight in the cage one day?

I’ve never trained MMA before, but I take Muay Thai classes every time I have the opportunity. I also train no-gi a lot for the BJJ competitions that usually take place at end of the year. I have been always afraid of getting hurt pretty badly, like breaking my nose, or a tooth, and the money they pay for the fights wouldn’t even cover the medical bills. However, with the UFC female fights getting very popular, engaging in MMA is starting to make more sense to me. I’ve always wanted to make at least one MMA fight so I can experience the adrenaline of fighting in the cage.”