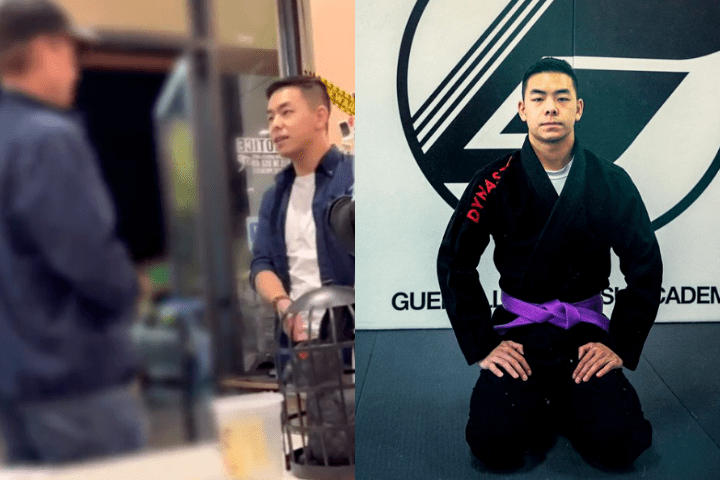 Khai Wu is a BJJ purple belt and MMA fighter coming out of California, United States. In a video that emerged a couple of weeks ago, Wu can be seen deescalating a potentially dangerous situation in a restaurant, where an enraged customer was hassling its manager.
During the quarrel which was caught on tape, Wu appears to have overheard the dispute and to have decided to get involved himself – handling the situation like a true professional.

Watch #MMA prospect Khai Wu diffuse a situation with an unhinged customer. He handled himself like a civilized individual even though the dude was out of pocket. This should be in the news. #StopAsianHate

Khai Wu took it to social media to further clarify what happened and why he decided to step in:

A few of my buddies and I went to get some boba drinks in Tracy for dinner on Halloween night. Shortly after we received our food, guy in the navy blue comes in talking how someone stole his food and ran down the plaza. Then, he starts talking about wanting sushi and insisting that this restaurant has sushi.
Guy in the grey T-shirt is the manager and he’s telling the guy that they don’t sell sushi, and I can tell he was getting flustered. Navy blue guy starts getting loud and disrespectful, saying that he doesn’t understand what the manager is saying and wants someone who speaks English; even though the manager can speak English just fine.

Navy blue shirt guy starts speaking in a condescending way to the manager. And then eventually commented things like: “Let’s get something American straight”, which you can hear in the video.
That’s when I couldn’t just sit back and watch anymore. I’ve been coming to this spot for years and know how hardworking and patient these folks are. With Asian hate crime on the rise, I gotta be honest I’ve been hyper vigilant.

My intentions of posting this is to encourage everyone to stand up and speak up for those who cannot due to maintaining a professional business or whatever the reason may be.

I understand people make mistakes or sometimes say things without understanding how it may hurt or affect others. I blurred the navy blue guy out because this isn’t a cancel him type thing.
And I asked him to step outside to talk because the restaurant was full of families enjoying their dinners. It was handled verbally and navy blue guy left the premises shortly after and then some cops came by later. Let’s continue to help and work together during these times.