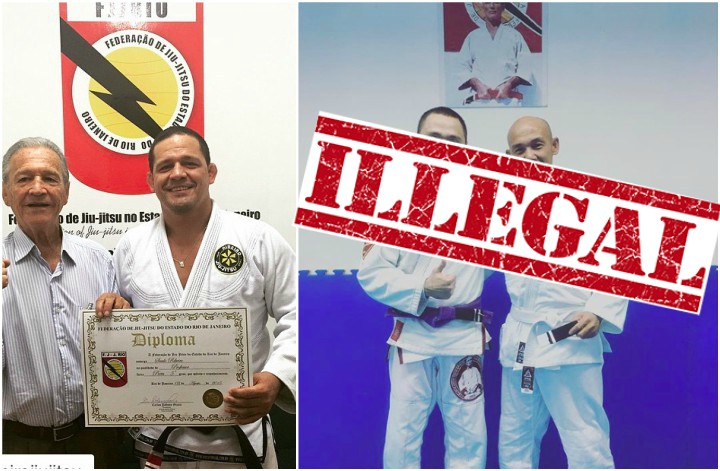 The Jiu-Jitsu Federation of Rio de Janeiro has just issued a statement that will surely ruffle some feathers in the worldwide BJJ community. It is a reminder of one of their federation rules which bans purple and brown belts from opeing BJJ academies and teaching Jiu-Jitsu. To teach, you have to be a black belt.

Jiu-Jitsu Federation of Rio de Janeiro also known as Jiu-Jitsu Federation of Guanabarais a governing body of Brazilian Jiu-Jitsu in the state of Rio de Janeiro, Brazil. current president of the federation is 9th degree red belt Carlos Robson Gracie. The federation is the official certifying entity for the Gracie style of jiu-jitsu. Specifically, it controls all teaching certifications, as well as all promotions to the rank of black belt and above.

” In Jiu-Jitsu, only black belts can teach. Only the ones that have acquired this rank have the authority and knowledge to teach. Do not forget, the presence of a black belt on the mat is obligatory! ”

This statement is quite controversial as it does not take into account the regions and countries were Jiu-Jitsu is still new and growing and where black belts in bjj are a rarity.

BJJ World Champion, Professor Victor Estima started training 20 years ago in Recife, a region which back then had no black belts. His then instructor Ze Radiola ( who coached all the champions such Braulio Estima, Otavio Sousa etc..) was just a purple belt at the time. He is now one of the most respected BJJ coaches in the world.

The rank of purple usually takes around 5 years to achieve and is a respectable level in BJJ. A black belt in Judo on average takes the same time to be reached.

The Jiu-Jitsu Federation of Rio de Janeiro awards a black belt after 6 to 15 years of jiu-jitsu practice. The black belt ranks as follows (from highest to lowest):

All promotions involving any black belt rank require a recommendation of two masters and approval of at least five officials of the federation. Ranks below black belt are awarded by individual professors and are then confirmed publicly through competition with other students of the same rank. Beginners and new students wear a white belt. Adult belt levels progress from white to blue, then purple, and finally brown, after which the practitioner becomes eligible for a black belt. There is a larger number of belt colors for children.