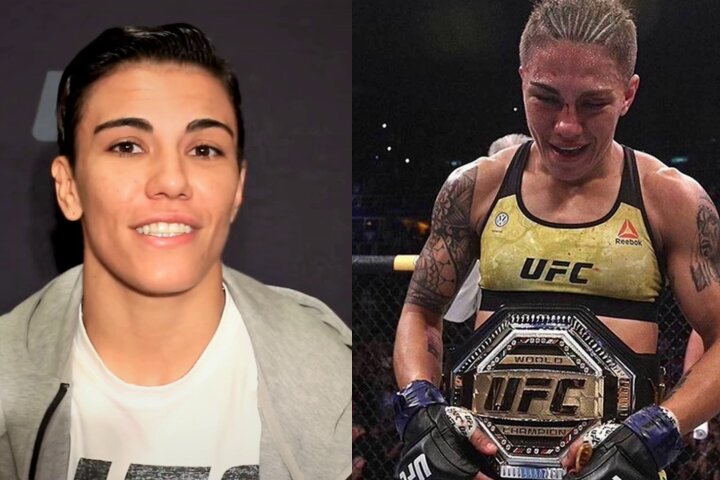 Jessica Andrade is a former UFC Strawweight champion, with a pro MMA record of 21-9. She’s also a Brazilian Jiu-Jitsu black belt – which proves a lot, since she’s earned 7 of these wins by submission!
However, her main focus is MMA. This is what she had to say after one of her BJJ tournaments:

I love Jiu-Jitsu, but I’m an MMA athlete. Of course I enter competitions to be champion, but the main objective is to work on the fight as part of training for the UFC. So, I try not to have my guard passed…
In some situations in today’s fight, if it was in MMA, I could have hit my opponent. She is to be congratulated on her victory.

To much of a lot of people’s surprise, Andrade has recently joined the well-known OnlyFans platform. Unfortunately, her nude photos were leaked – something she expected could happen.
In an interview for MMA Fighting, she explained why this didn’t shake her up:

Not everyone is honest with you all the time. The photos were a package to one person but you don’t know this person’s heart and nature, and unfortunately that happened. But it was a learning experience. So we do photos now, but only to the right people and the right way.

Andrade mentioned that, with the money she earned from OnlyFans up until now, she’s managed to pay off her house and that she’s began renovating her mother’s house:

I paid off my car and six or seven months of rent [in Las Vegas] in advance. I haven’t even used the money of my last fight’s purse. And I was able to pay my bills in Brazil, help my family and help Fernanda’s [Andrade’s wife] family with OnlyFans’ money.
It’s nice when you check your account and see the money is still there. You’re like: “My God, I’m buying a lot of stuff on Amazon, my house is like a market right now, and the account remains the same.”

She emphasized that OnlyFans isn’t just about what most people think it is, and that she’s content with the platform:

People think OnlyFans is just p*rn, but it’s not only that. It’s a platform to show your daily life, your fights, the things you do. I’m very happy with OnlyFans.