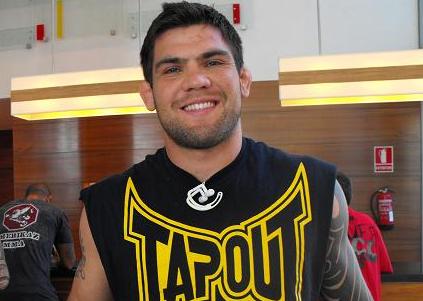 BJJ world champion Robert Drysdale will make his long-awaited UFC debut in November at UFC 167, according to MMA Junkie. Drysdale, 32, was scheduled to make his first step into the Octagon against Ednaldo Oliveira at UFC 163. A staph infection forced him to pull out of the bout, however, and he was replaced by Francimar Barroso.

“Now fully healed, Drysdale will face Cody Donovan at UFC 167 in Las Vegas. The event will take place on November 16, just a few miles down the road from his world-renowned jiu-jitsu school on Rainbow Boulevard near Sahara. In addition to his multiple world jiu-jitsu titles, Drysdale also serves as grappling teacher for a number of the sport’s biggest current and former stars, including former light heavyweight champion Forrest Griffin.

After a successful submission grappling career, Drysdale made his mixed martial arts debut in 2010. He remains undefeated with a 6-0 record and signed with the UFC earlier this year after beating D.J. Linderman at a Legacy Fighting Championship event in April.

Donovan, 32, is 8-3 as a professional mixed martial artist. He made his UFC debut last December with a win over Nick Penner at UFC on FX: Sotiropoulos vs. Pearson, but lost his next outing to Ovince St. Preux in August.

UFC 167 is headlined by a welterweight championship fight between champion Georges St-Pierre and Johny Hendricks. Chael Sonnen and Rashad Evans, friends and frequent UFC on Fox co-analysts, will face off in the co-main event. In addition, the main card features two welterweight showdowns in Rory MacDonald vs. Robbie Lawler and Josh Koscheck vs. Tyron Woodley.”