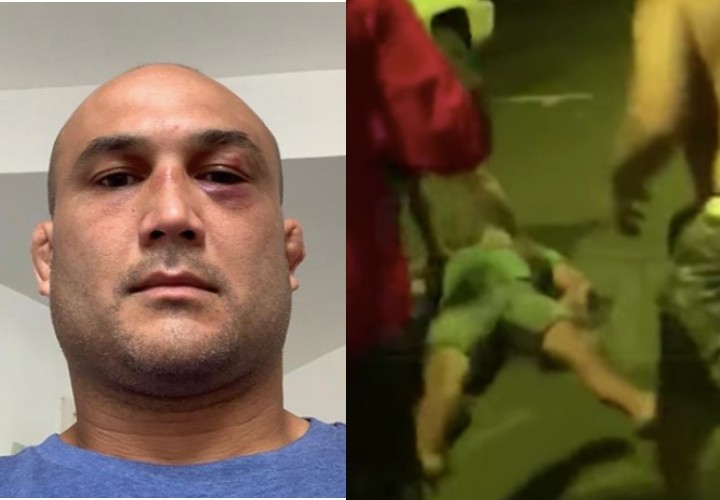 Last week, UFC Hall of famer and former 2 weight class champion BJ Penn was involved in yet another bar fight in Hawaii.

Footage was released by TMZ sports showing BJ knocked out by a civilian.

In an interview with TSN, Penn gave his side of the story:

“Just to begin with, there was another video posted on TMZ of me holding somebody on the ground. From that—because I’m in the middle of a custody case right now—I got a lot of slack already from the custody evaluator, from their lawyer, of course, from my lawyer. So the last thing that I’m looking to do—yeah, because everybody was saying that I held down a bouncer, but it wasn’t a bouncer or anything like that. It’s just something happened and I had to protect myself and hold a guy on the ground. So the last thing I want to do is get into any type of trouble.

“My custody case, me seeing my kids depends on all this stuff. It’s just really strange how things just happen and you never see this kind of stuff. But here I am in a custody case and this happened twice.”

“I’m at a concert going to meet a friend of mine that I knew since we were real young kids and I’m over there, and then an acquaintance of mine he gets mad about something,” Penn said. “You know, something was said or what or if it was an old past thing and then he wants to fight about it. I’m like, ‘Naw naw,’ we’ve got a lot of witnesses, everybody can corroborate my story. I’m like, ‘No, no, no, I don’t want to fight. We’re friends, everything’s cool,’ this and that. He even walks outside and I’m thinking, ‘Aw, this is silly.’ I’m going to go get him, calm him down, come back inside, we’ll come enjoy the concert, we’ve got some other friends there. I walk outside to go give the guy a hug and then he hits me twice. I’m like, ‘No, no, calm down.’ I try to give him another hug and he hits me a couple more times and then he hits me again—I wish they didn’t cut the video in half so whoever put that video up cut it in half, I wish they had the whole thing that showed me trying to hug the guy—finally, my adrenaline kicked up because he was hitting me so much, I’m like, ‘Go ahead, hit me again.’

“But really, I thought the guy would eventually just be like, ‘You know what? Forget it, B.J.,’ give me a hug or whatever, walk away. He hit me and he hit me good. Knocked me down. And then when I got back up he tried it again and then I just had to defend myself. So that’s what you see in the second video.”

“The last thing I’m trying to do is trying to look to go out into a fight. Ask anybody who knows me, I’m not the first guy to go around and just start pushing people. I’m an older guy too and I just want to enjoy my life and I was thinking today, driving around, why don’t I have two bodyguards on the sides of me at all times just making sure it’s impossible I can get into any trouble. I was thinking that all morning.

About his upcoming fight with Nik Lentz:

About his alcohol consumption:

“We were at a concert inside a bar and grill place. Definitely, I had two drinks when I got over there. But all those old past grudges, that’s what happened with that last situation. I don’t know, I heard so much things from so much different people of why that happened. All I know is what exactly happened.