Bia Mesquita On Her Rivalry With Gabi Garcia: “She Knows How To Use Her Weight & Strength In Her Favor…” 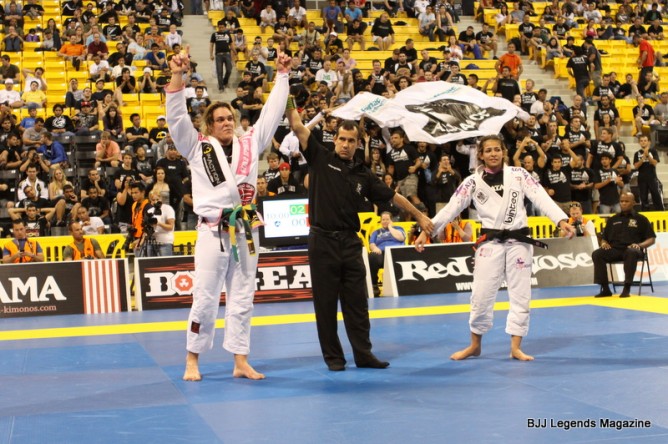 Bia Mesquita once again came up short in the absolute final of the World Jiu-Jitsu championships. Despite being to change this situation by applying a different strategy, she once a gain lost to Gabi Garcia reunited and saw her opponent win her fourth title.

In an interview with tatame (In portuguese), Bia commented what went wrong in the fight.

“She said that she was going to pull me down and actually she didn’t. I was hoping to play top game, make some passes. I always try to do other positions, but not to go out of my comfort zone which is the guard. I hurt my thigh trying to do a sweep to take the back. ”

Gabi has dominated the female Jiu-Jitsu in recent years and, according to Bia, the difference comes from her opponent’s physical strength. “She knows how to use her weight and strength in her favor, hindering and blocking her opponents.”

Despite taking the silver medal in the absolute, she won the championship in the lightweight and it was cause for much celebration. In the decision, against Fabiana Borges, Bia finished with an arm bar.

“I was feeling very good, strong, prepared, well trained. I came determined to have good fights and reached my main goal which was to be two time champion at black belt lightweight. It was even more special because it was the first time that I was able to bring my mother to watch. It was very exciting. Happiness without limit, “said the fighter.