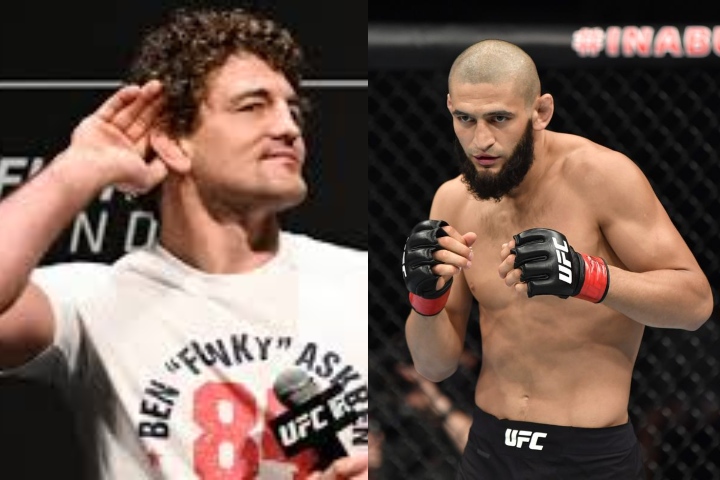 Chimaev has a rich wrestling background, as he wrestled for Swedish Wrestling club BK Athén. He easily won the Swedish national wrestling Championship in freestyle in 2018. He won his matches with a convincing 10-0, 10-0, 10-0 through the tournament and 7-0 in the final. Chimaev has won the Swedish Wrestling Championships in both welterweight and middleweight.

He recently started to train BJJ in the Gi at Allstars Training Center in Stockholm, Sweden. His BJJ instructor Alan “Finfou” Nascimento, a multiple-time BJJ world champion, felt it was time for Chimaev to be awarded his blue belt in Brazilian Jiu-Jitsu:

Khamzat Chimaev is currently in Las Vegas, Nevada preparing for Saturday’s UFC Vegas 11 against Gerald Meerschaert, before a second fight against Demian Maia in about a month’s time.

MMA vet Ben Askren, who is friends with Merrschaert, isn’t buying into the Chimaev hype train yet. He said speaking to Submission Radio:

“Yeah, it’s great. Yeah, I told Gerald it’s great. It adds to the story, and you can steal somebody else’s hype,”. “I mean, that’s for sure, right? So, there’s this hype behind Chimaev. Steal his hype. Make it yours. And, you know, Gerald probably can’t make welterweight, which is the Maia fight. So, just tell Maia to bump up or something. I think that’s the move for sure.

“The hard part about it is, we saw him twice in the UFC. But the first guy he fought, John Phillips, he’s 1-4 in the UFC. So, he was very unsuccessful. And the second guy he fought was a new addition to the UFC. So, he has not won a UFC fight. And so it’s like, ok, well, he definitely smashed these guys, there’s no doubt about that, but are these guys Gerald Meerschaert level competition? And the answer to that, is no, they’re definitely not. So, sometimes people can look great against guys who aren’t as good, and then when they step into a little competition, it’s a lot harder. So, I don’t really know what to expect out of Chimaev. I know Gerald is really good, he’s really tough. But yeah, I don’t know about Chimaev yet.”

For Askren, Meerschaert could pull out the victory:

“I think one of the things is, Gerald’s really hard to submit. He’s really hard to control. He never wrestled, but fairly solid wrestling. So, one of the things I can see happening for sure, is Chimaev comes out like a ball of fire and isn’t able to do the damage, isn’t able to get the submissions, and then Gerald starts taking over as the fight moves on. I can see that happening one hundred percent.”