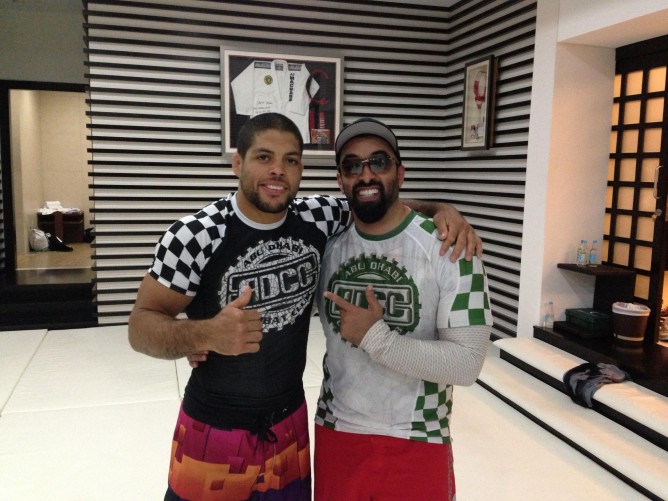 The week after he won the gold medal at weight at the World Professional Jiu-Jitsu Championship held in Abu Dhabi, André Galvão received a special invitation: training with Sheikh Tahnoon Bin Zayed, creator of ADCC and share holder of the UFC. Tahnoon, who is a black belt in Jiu-Jitsu, usually invites BJJ greats like Renzo Gracie, Ze Mario Sperry, Rubens Cobrinha and Rafael Mendes, to train on the mats inside his palace.

“I would like to say thank you very much to Sheik Tahnoon for the great time and training sessions in Abu Dhabi. I really appreciate the opportunity once again and also for all you already done for our art. I will be using all the techniques I learned with you last week for sureit’s all in my notes book .
Also thank you very much Abu Dhabi Combat Club for everything. I can’t wait to see you guys again in China in October .

Now time to get home/family/friends/students/work/hard work. I miss all you guys. I can’t wait for the training tomorrow.” Said Galvao on his Facebook page.

Twice champion at world pro, André Galvão is now preparing to seek his third title in the first week of June, at the IBJJF Worlds in Long Beach, California. He is also scheduled for the second edition of Metamoris Pro in a  superfight with Rafael Lovato.