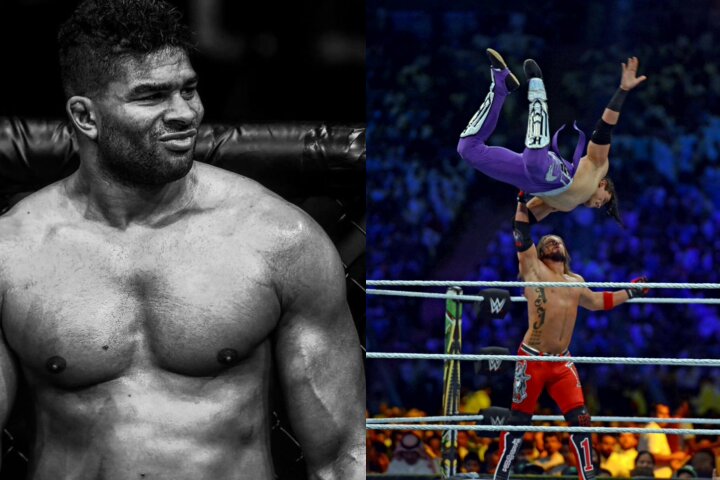 Alistair Overeem’s first opponent in the UFC was Brock Lesnar, a great opponent who was one of the biggest stars of professional wrestling. Overeem beat him decisively on that day in 2011, starting his UFC career in a great way.
Now, 10 years later, Lesnar is back in the WWE ring; while Overeem signed a contract with another MMA promotion, called “Glory”. He is going to take on Rico Verhoeven and his heavyweight title on October 23.

It was on that occasion that he was a guest at Ariel Helwani’s “MMA Hour”, who recalled his fight against Lesnar. Helwani then asked Overeem about his stance towards professional wrestling and its fans.
Alistair responded:

I’ll explain how things are with me. I watched it when I was eight or ten. Hulk Hogan, Ultimate Warrior, I was a big fan of those guys. Great and fun, as was Andre The Giant. I stopped watching after that, so I don’t watch from somewhere in 1992, 1993, maybe 1994.
And lately, I’ve started watching a little bit on YouTube. Oh my God, that looks pathetic. It’s pathetic what the guys are doing. It’s fake, it’s pathetic, it’s stupid. It makes absolutely no sense.

As Helwani expressed disbelief to this and other claims, he tried to stop Overeem in his thinking. But Alistair continued:

It’s pathetic and it’s not a sport at all. It’s bad acting, poor bad acting. I apologize to all the fans, but I’m honest and I give my opinion. Free state, isn’t it? It’s pathetic and that’s why I haven’t watched it for 20 years. Never I didn’t watch Brock where he performed, I never watched CM Punk. When they came to the UFC, I knew they were from the WWE, but I never watched them.

Alistair Overeem was on #TheMMAHour and called #wrestling lame, stupid, makes no sense, and other words we choose not to repeat. pic.twitter.com/KNg1RbsOyS