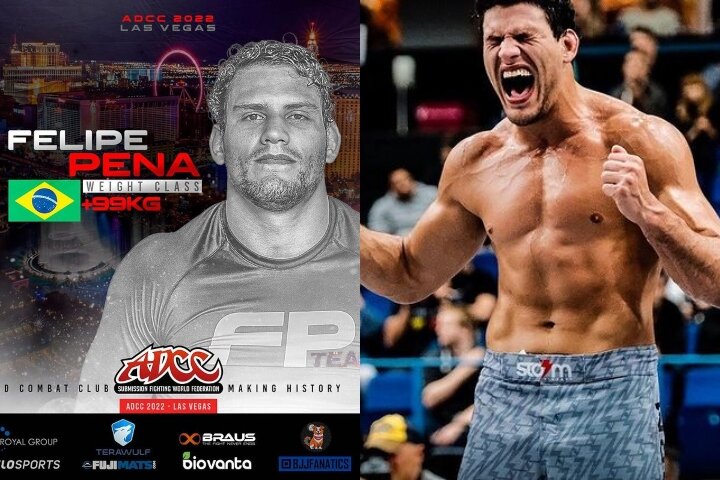 It’s now official! Felipe Pena has moved to the 99kg+ division for ADCC 2022; which puts him in the same bracket with Gordon Ryan.
The ADCC organizing team posted the news on their official Instagram account:

ADCC 2022: Felipa Pena has been approved to move to the 99+ KG division. When all said and done 99+ would be the most stacked division in ADCC history.

So, are we going to watch a Felipe Pena vs. Gordon Ryan match? Possibly so. Pena called out Ryan earlier this year:

My chubby son is a liar boy who always says that I don’t want to fight him, that I never sign the contract etc… And that’s the biggest lie in the world; because I’ve tried to make this fight happen several times but there are many fools who believe.

I don’t think there’s anything wrong with doing mkt for a fight, doing trash talk, this is based on the profile of each one, but he goes beyond the limit; offends, lies and deceives a lot of people in this big internet world.
Since the ADCC confirmed that he will fight in the +99kg category (which by the way was not in my -99kg category)… I make a public and official request here to the organization to change my category and put me in his weight class(+99kg).

My baby is very angry, I really want to move up and beat him for the 3rd time, punishment time… Change approved @mojassim80 @adcc_official ?

Ryan was happy to accept the offer:

@adcc_official @mojassim80 give him to me on the 1st day. This way he will have a good seat on the 2nd day in the stands, where he belongs, as he watches me beat up Andre worse than Andre beat him up. I want him 2nd match.