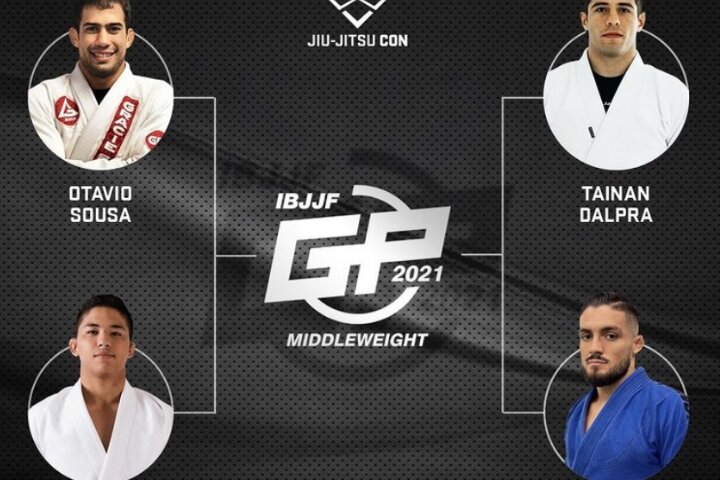 From November 10 through 13, the $20K IBJJF Middleweight Grand Prix will take place in Las Vegas. It’s set to be a part of the 2021 Jiu-Jitsu Con, an event featuring a pair of four-man tournaments – with each carrying a $20,000 prize.
Yesterday, the Federation announced its four Middleweight competitors: Otavio Sousa, Andy Murasaki, Tainan Dalpra, and Renato Canuto.

Otavio Sousa is for sure the Grand Prix’s most experienced competitor. He is a 4x Pans and a 3x World Champion who has defeated names such as Matheus Diniz and Gabriel Almeida. However, he hasn’t competed since 2020, so it will be interesting to see how his competitive game has improved.
His opponent, Andy Murasaki, is an ATOS representative. He did compete in 2021, albeit not a lot… However, even though he has been promoted to black belt just recently, he already has wins against Matheus Luna, Gianni Grippo, and Kennedy Maciel at this belt level – he’s one of the most promising future BJJ stars!

Tainan Dalpra – also a black belt since quite recently – holds wins against the likes of Matheus Luna and Ronaldo Junior. He has earned a Pans gold medal as well; and his most recent loss came by the way of Mica Galvao at Evolve ur Game 2.
Renato Canuto, who is his opponent, is more than a seasoned competitor himself. He is a No Gi World Champion and a winner of the recent Third Coast Grappling Grand Prix, who has a good chance for securing the gold medal at this IBJJF Middleweight Grand Prix – as all other athletes do.