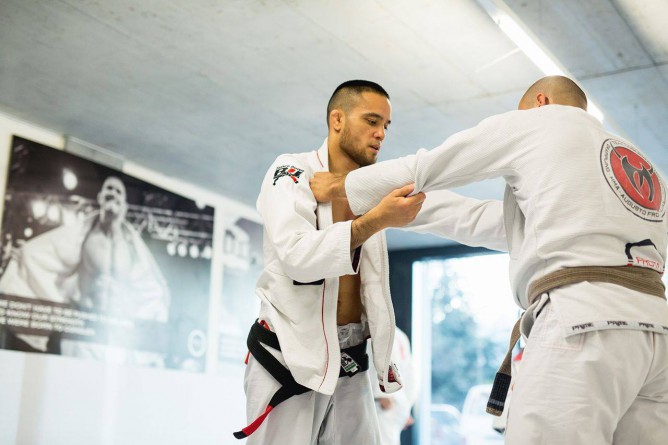 You’ll never stop learning in Brazilian Jiu Jitsu! There’s always so much to improve in that you can be certain that it’ll never seize to be interesting. However, sometimes Jiujiteiros come to think that their progress is too slow; and so they question themselves if they’ll ever be as good as those black belts are.
But here’s a comforting thought: first of all, you will learn as you continue training BJJ. And secondly, those black belts… They’ve been improving much faster and with much more quality ever since they received their black belt!

Really? Yes, really! This is one of the reasons why you have to persevere – and here are two main reasons so as to why you’ll make most progress as a black belt.

Perhaps the most important thing due to which you’re set out to improve better as a black belt is because, once there, you won’t just be an athlete – but a teacher as well.

One of the ways you’ll be teaching may be by being a coach/instructor. This is something you might’ve been doing for some time already, through coaching kids’ classes or beginner classes at lower belt levels. However, this doesn’t have to be the case. You don’t have to be a coach to teach; for, once you reach the black belt level, you’re practically a reference point for everyone around you.
That is, people will be looking up to you; both the ones you’ve known for quite a while and the ones that have only begun training. They’ll want to improve and become as good as you are one day, and so they will be asking for advice.

In other words: as a black belt, you’re going to spend quite some time explaining techniques and setups to others, whether you’re a coach or not. And in this process – where you’re figuring out how to best explain a certain move, what the given individual has to work on the most, which details will make him improve… You’ll become better by being involved in the teaching progress.
Beforehand, you only had to „take in“ techniques, doing so in a rather passive way. But now you have to transfer them onto someone else, which will make you think about them on a much deeper level; getting you to understand their nuances and, thus, making you better in acquiring other techniques with more quality as well.

AS A BLACK BELT, YOU HAVE A TON OF EXPERIENCE

And the second reason behind the much more efficient progress you’ll be making as a black belt is that you’ll have much more experience. That is, all those years of mat time and all those lessons (not just techniques in and of themselves, but lessons!) you’ve learned along the way will add up to fantastic experience; through which you’ll be able to pick up techniques and setups much more quickly than before.

What this means, in turn, is that you’ll be able to acquire moves with way less repetition – simply because there’s a high chance you’ve learned lots of similar moves in the past already. Also, as you have a vast number of techniques under your belt, you’ll be better equipped to play with their setups.
Additionally, it’s worth mentioning that you’ll also feel less stressed about „progress“ than you were before! The Jiu Jitsu experience has taught you that, no matter how you feel and no matter what happens, if you continue training… You will both reach the black belt level and become a really good Jiujiteiro along the way.