You NEED To Know These 5 Split Hip Judo Throws 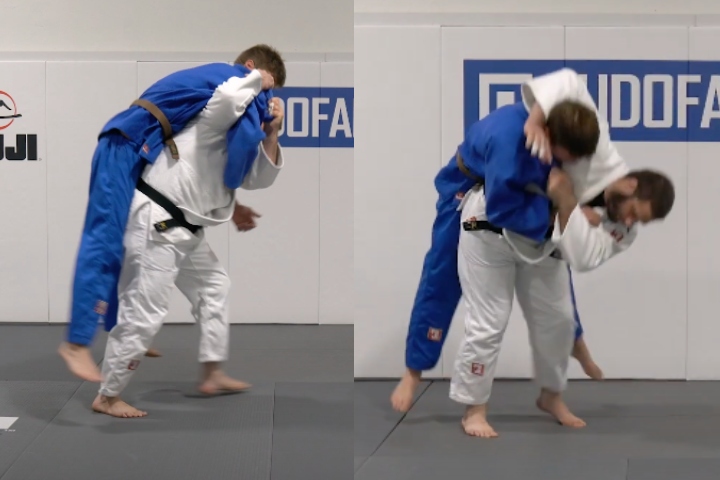 Hey, you. Yes, you! Know what time it is? No, not for ground work (again); but for leveling up your stand up game… More concretely, your Judo throws! Take on this opportunity and learn 5 split hip variations of basic Judo throws, taught by Travis Stevens.
Let’s get to it!

The first split hip variation is perhaps the most famous one; from the Ippon Seoi Nage. Travis shows that you’ll grip the opponent’s collar over the top of their arm. Then, the first option you have is to split either with your left leg (one on the same side as your grip) going behind; or you can split with your right leg going through the center.
Whichever of the two options you choose, commit to it and finish the technique.

The second variation is a bit different, as it is for your Morote Seoi Nage; but it’s equally as effective as the first one! Start with the collar and sleeve grip. When you step in, so as to come through, your elbow will come over the top of the opponent’s arm. Pull them tightly and close your elbow off.
From here, Travis simply backs up a bit – picking his training partner up and throwing him to the mats.

For the Koshi Guruma variation, Travis emphasizes that it’ll require a bit more mobility in your thoracic spine and ribcage area, if it’s to be executed well.
Travis shows that you’ll do it from a post-post position; then moving the opponent’s leg to the side with your foot, in order to create the angle necessary for the throw. That way, when you skip and split into position, and flank your arm over the opponent’s head, you’ll be able to easily pick them up and throw them down.

Travis explains that the Sode Tsurikomi Goshi is traditionally executed with a square stance or with a drop in your hips and knees; but you can do it through a split hip variation as well. And so, when will you use it exactly?

A lot of times, when you’re controlling the sleeve, your opponent will establish a post onto your collar, making it difficult for you to get through to them. What you can do then, Travis says, is that you can lean back and break that grip. As you do this, you can come forward, split the leg and come through; executing the throw.
Pay attention to how Travis uses his hands in this technique, for they do a lot of work throughout it. To how he doesn’t just throw his training partner to the side; but how he uses his hands to open and pull so as to finish the technique.

Travis shares that, regardless if you’ll use this throw in training or competitions a lot, the one thing you’ll get out of it – and will benefit from in general – is the ability to switch your hips.
That said, he demonstrates that you’ll set up this technique by first establishing a sleeve grip. Then, when your opponent reaches to grip your collar on the opposite side, you’ll use your c-grip to deflect their arm, bumping it up. As you do that, you’ll step through your opponent’s legs (with your knee on the backside of their leg).

To finish the technique, wrap them around their hip, lean back, come in with your back leg, lift them up and bounce them off your hip; finishing the takedown.