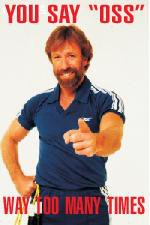 This was posted was by members of the UK BJJ Underground on the Facebook  page. There are some gems here:

Rob Taylor: You put on a slim fit shirt and it fits everywhere except your forearms.

Richard Shore: you buy a pair of winter ear muffs yet they only fully cover one ear

James Carey: Take a couple of weeks off for holidays and realise it’s the first time some part of your body has not been in constant pain for longer than you can remember…

Stephen Stanley: Every time some one walks behind you, you shrug your shoulders and hide ya neck, just in case that persons tries a rear naked on you.

Chris Crossan: You hip escape out of your bed while sleeping !!
You wake up and attempt a collar choke on your duvet !!
You start thinking of guard passing during sex !!!

Hannah Gorman: You bridge and roll to turn over in bed..

Kai Lam: Or shrimp to turn over in bed?

Simon Dugdale: ‎”Head, Shoulders, Knees and Toes” is no longer a kids song but your list of most frequent injuries.

Hannah Gorman: Bridge roll/bridge and shrimp. A combination of both I’d say.

Simon Hayes: You feel confident in all situations.

Alyn Weyman: You can’t get your wedding ring over your first knuckle !

Kat Gibson: You find yourself following all the people with cauliflower ears to various leisure centres to find the way to the next comp.

Sarah Merriner: when asked for advice, the answer you most often give is “choke them”

Lee Renaut: When someone say hi and you instinctively reply OOOSSS!!

Darrell Henwood: When you meet someone, they ask if you have hobbies etc martial arts comes up and they do some stupid karate chop motion and i hate them forever.

Omied Martyn Jalalian-Khakshour: You take double underhooks whenever you hug someone

Mutahar Chalmers: You see people with long necks and you muse how easy it would be to choke them. you get your half butterfly hook on your girlfriend while cuddling in bed and sweep to top position.

Morefire Icon Bjj-team: Your partner thinks you are weird cos anytime you on the web you hardly ever look at p*rn anymore

Rob Taylor: You often accidentally rip your baby’s clothes while changing them.

Dennis Partridge: You keep thinking how easy it would be to collar choke that banker in his suit

Renata Urbanaite: You being asked to go out on a date on friday night and you answer is ‘I can’t, I have to train on saturday’

James Carey: All decisions about any aspect of life are immediately referenced against how it may effect your training.

WolverDean Reilly: You use the leg drag pass to pump yer girl.

Kai Lam: Your friends and/or partner get tired of you talking about jiujitsu.

Morefire Icon Bjj-team: You roll your eyes any time u see a douche in a Tapout tee

Morefire Icon Bjj-team: You’ll do anything for Açai, you think £5 is perfectly reasonable and your kids will go hungry first but you gotta get that Açai! …with granola & the syrup!!!

Morefire Icon Bjj-team: The name Meerkatsu does not make you think of car insurance

Donald Iain Macintyre: Someone asks you a question at work and you reply ‘ooosss’ and they look at you like you are mad. You then explain ‘ooosss’ can mean everything except no, but they still think you are mad.

Donald Iain Macintyre: When your wife who has never been to an actual BJJ session has a pretty good guard pass and armbar.

Simon Dugdale: When you take your daughter to her first Judo lesson and she tries to RNC the instructors kid. (True story)

Jolie Versatile: When all your work colleagues now accept that you’re not getting beaten by your other half when you rock up to work with fresh arm and leg bruises.

Jonathan Morris: When your loved ones become training partners/dummies

Neil Williams: You spend most of your family holidays looking for people with cauliflower ears and a suitable surface to roll

Sahid K-ammo: When you are the only guy in the group wedding photo throwing a hang loose
August 24 at 8:08pm via mobile · Like · 8

Luca Gacci: When your cat seems to be doing jiu jitsu guard and you take inspiration from it

Mutahar Chalmers: Monkey gripping the overhead handrail on the tube.

Peter Richardson: Holiday destinations become limited to were you can train for 2 weeks in the sun 🙂

Simon Dickson: You put your 15 month old into closed guard and he loses it.

Kev Capel: When u step on the scales three times a day to check u haven’t gone up a weight division.

Jonathan Morris: When you start to teach your child an arm bar and RNC on yourself.

Simon Hayes: when you can’t open any screw top bottles your missus has tightened…..

Steve Cave: Man When u size up every big guy at your local gym for the perfect takedown.

Steve Cave Man: When u look at men’s lapels as U walk pass them to decide which one will allow a deeper cross grip !

Rob Taylor: Tying your shoelaces can be a seriously difficult task at times.

Morefire Icon Bjj-team: You wore out the soles of your flip flops

Kyle Kevin Chesmore: when you can go to a completely different part of the country and see someone you’ve seen once at a BJJ comp and immediately talking as if you’ve known each other for years!

Neal McMahon: You type “BJJ gi” into Ebay on a almost daily basis……

Sahid K-ammo: All the tshirts you own have competitor/competidor on the back

Simon Dugdale: When family stop asking what you want for Birthday/Christmas and just give you money to buy that Gi you want as anything they would get you would be wrong.

Gus Oliveira: When your wife or Girlfriend mount on you for a bit of fun!!! and you have to reverse the situation within 3 seconds before she cores 4 points in your head!!!! Only now you think!!! lets the fun begins!!!!! than you think shit, I guess she got 3 points for passing!!!!

Claire Crowther: When you start turning down drunk nights out because you’d rather go and roll instead !

Kieran Bhugobaun: when you have a freezer specifically for Acai and Ice at your house

Sahid K-ammo: When your watching a movies final fight scene with the bigger stronger bad guy vs the good guy and it bugs you that you keep seeing the oppertunity to take the back to look for the choke being missed… Or if he is on the back you keep wanting to shout put the bloody hooks in.

Jp Hamilton Savory: When you use the phrase SMASH THEM as an answer to sport (ANY sport) related questions.

Ben Sulston: When your wife is happy when you have an injury, because she actually gets to see you!