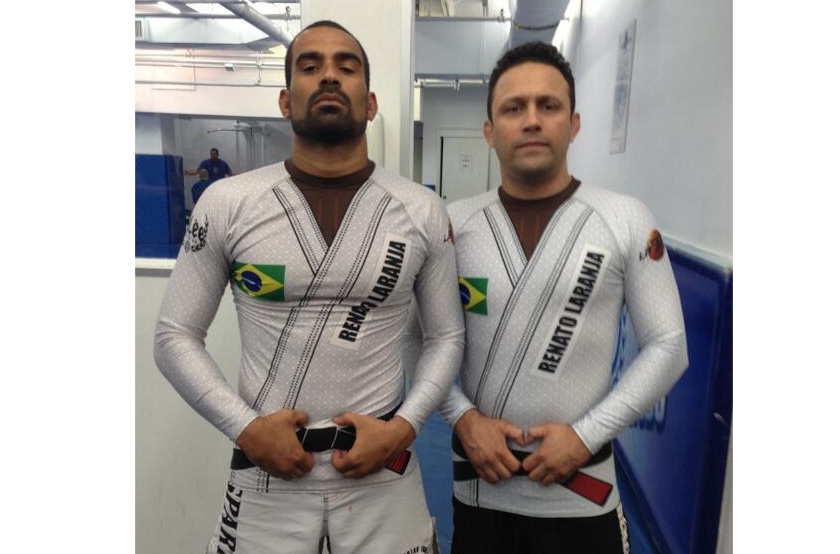 Why train in the gi?? Well Gustavo Dantas has the answer:

The official uniform of Jiu-Jitsu in which you will be training is called a “Kimono” or “Gi”. This uniform consists of 3 pieces: a jacket or top, a pair of drawstring pants, and a belt. The uniform is made out of a specially weaved cotton material that will be able to withstand the rigorous practice of Jiu-jitsu without immediately tearing. Your Kimono should be kept as clean as possible and treated as your armor.

Why Train with the Gi?

As you practice Jiu-Jitsu, you will find it useful as both an offensive and defensive tool. You will also realize its value as a common uniform to promote safe and technical practice of Jiu-jitsu.

The Gi game obviously has a lot more to it. Everything that can be done with the Gi, can be done without it, making it a more complex game. Additionally, taking away the Gi allows physical attributes such as size, strength, and athleticism to come to play with greater effect due to the lack of levers and friction. Working with the Gi is generally considered more of a “thinking man’s” game. Training “No-Gi” can also be a thinking game, but because the gi removes many physical advantages, it adds more techniques.

For now, you should view your Kimono as a set of training wheels. As you develop a higher level of proficiency, you will learn to perform Jiu-Jitsu techniques with and without a Kimono. The kimono will add a level of sophistication to your game that will result in you, as a student, becoming a more advanced and technical fighter.

It is simply logic that when you add the Gi to a grappling match, it will add more possibilities. The match therefore becomes more complex; Just as a game of Chess. Since Chess has more pieces with various types of attacks and movements, it is more intricate and takes many years to master. This is the same concept for Jiu-Jitsu with the Gi. It would be much easier for a good chess player to join in on a game of checkers than the other way around.

The Gi “levels the playing field” by taking away many physical attributes. Without the Gi, a bigger person can use more of their strength and faster opponents, more of their speed. The addition of the Gi therefore forces fighters to slow down in order to be more aware of their movements. The point of any art is to use more technique and skill than strength; using the Gi will help develop that skill. As a fighter progresses, and their understanding of the use of the Gi grows, they can then learn to apply their physical traits to their advantage.

You Can Always Take It Off

I’ve seen submission grapplers and wrestlers with ten years or more experience get choked by people with half that time while wearing the Gi; they look as if you’ve just put them in a straight jacket.

Unless you are patrolling a beach (in which case, you have a sweet assignment and nothing to complain about), your opponents are wearing clothes. There have been many reports from Military/Law Enforcement personnel saying that they favor training with the Gi and make good use of collar chokes. In fact, the core of the Modern Army Manual is based on Brazilian Jiu-jitsu and soldiers often train in their BDUs.