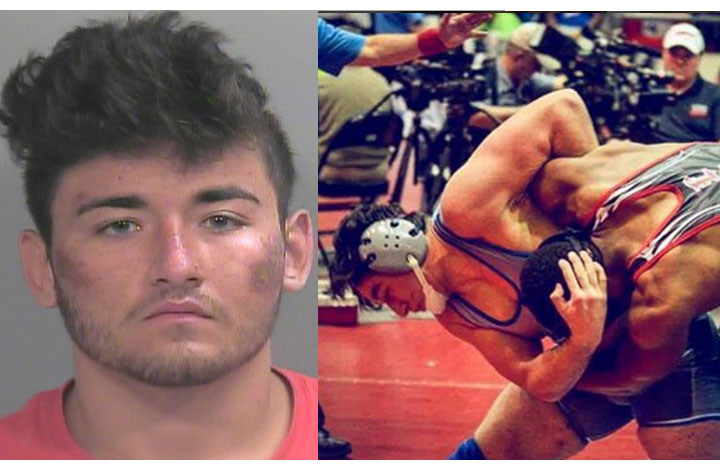 A former standout wrestler from Har-Ber High School in Springdale has been arrested this past Sunday after he broke into an assisted living facility and assaulted the staff, police said.

Treyton Baker, 18, was arrested in connection with commercial burglary and first degree criminal mischief, which are both felonies.

Baker jerked open the locked doors of the facility, according to the report. Two staff members said he started going towards them, yelling and tearing down decorations.

After refusing to leave Baker was forced into an activities room. With the door locked behind him, Baker started throwing items and pulled a French door from its frame.

After seeing staff members who have locked themselves inside a separate room, Baker demanded their shirts while yelling that he was a god.

Shortly after he encountered a female staff member, he demanded her shirt and started to pull the collar down from her shoulder. During the struggle, Baker kissed the staff member’s cheek and told her she was his wife, according to report. Staff then managed to push Baker out the entry doors where Springdale police met him and took him into custody following a brief struggle.

Pretty solid weekend, went undefeated individually with a 4th place finish as a team at Diamond State Duals. Lot of work to put in for February but really liking the way we’re looking. Finished off the first half of my senior wrestling season at 220 bringing in a record of (24-2) time to see what I can do in the second half at 195. #TheREALESTMurdersRow

Baker, who told police he had taken several hits of acid, caused roughly $2,500 damages when he broke the locking mechanism on the facility’s entry doors, according to the report.

Baker was named to the All-Northwest Arkansas Democrat-Gazette wrestling team as a senior in 2016 after finishing second in the Class 6A-7A state tournament. He compiled a 61-9 record during the season and tallied 168 career wins over four years at Har-Ber.

In February, Baker signed a letter of intent to wrestle at the University of the Ozarks in Clarksville.

He was released Sunday from the Washington County Detention Center after posting a partial bond of $5,000.