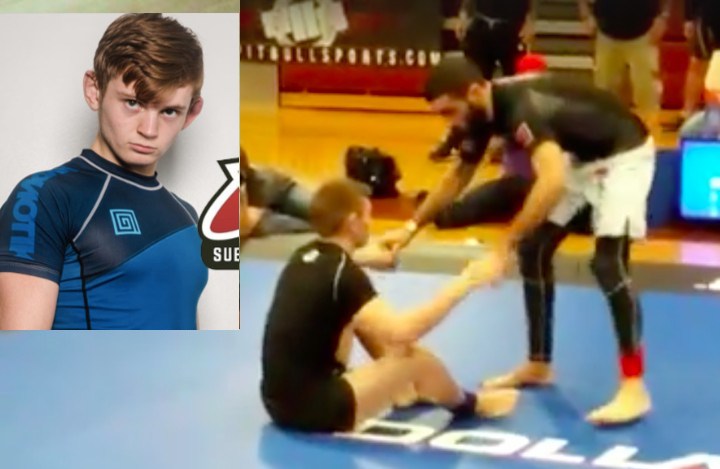 In this year’s ADCC match against Shane Jamil Hill-Taylor, Nicky Ryan displayed a great and kind of a confusing technique: starting from the bottom seated position, he scored a sweep that actually looks like a takedown!
Invisible Jiu Jitsu‘s David Morcegao breaks down this sweep-takedown superbly in the video below.

USE YOUR OPPONENT’S SQUARE STANCE AND „WRAP IT UP“

David first goes on to say that the essence of performing this technique well is twofold:
1) the ability to take advantage of your opponent’s „square stance“ (when he stands with his legs parallel to each other) and;
2) using the forward technical stand-up.

Another important thing to point out, David elaborates, is that this technique is nothing like a blast double leg takedown nor anything similar; but that it is about wrapping your opponents’ knees tightly with your arms, getting them close together by doing so. To help you understand it better, he also points out that you can look at this sweep as a variation of the closed guard Mermaid Sweep, where you wrap your legs around their knees and get them together – it is the same thing.

So, as Shane came towards Nicky’s seated guard with a square stance, Nicky went for it. He goes for it, David goes on to elaborate, with an ultimate goal of getting higher towards Shane’s hips, so that he can wrap his knees very tightly together and sweep him.
But, as in all competition matches, the „perfect execution“ rarely ever happens. Nicky came up to wrap his arms, but Shane sprawled, getting Nicky to lose his momentum and getting him stuck midway.

To make the best use out of this situation, Nicky decided to keep squeezing tightly and to pull back his posting leg, pushing it into the ground and driving himself through Shane to take him down.

David explains that what Nicky might have ultimately aimed for, and could’ve gone for, is bodylock passing. In that case, upon taking his opponent down, he would have been transitioning the „knees squeeze“ towards the bodylock and would’ve kept his elbows tucked in tightly. However, Shane was too quick and before Nicky’s elbows tucked in again, he managed to get into a more favorable position.

David points out is that he too, personally, prefers to keep hold of the wrap and proceed to smash pass his opponent – but that there’s a great problem with that, especially because it is No Gi. Since his head ends up too far from his opponents, that gives them a chance to frame on his head and to get out of the position.

Another great option to go for from this setup are, well – leglocks! David shows that if your opponent forces himself back into you, that you then have a good opportunity to elevate him and get yourself under his legs, setting yourself up to play the leglock game.

Following your opponent’s movement and getting him above and over yourself, setting yourself in a top position is yet another great option as well.

As an important point, David emphasizes that you need to be aware of the guillotine attempts from your opponents. They might try to guillotine you as you come up to wrap your arms around their knees, so be sure to minimize the possibility of that happening by shrugging your shoulders towards your chin and by getting your head as close to your opponent as possible. Doing this will have your neck protected when you are executing this technique.

Watch the video below to see the breakdown in action: