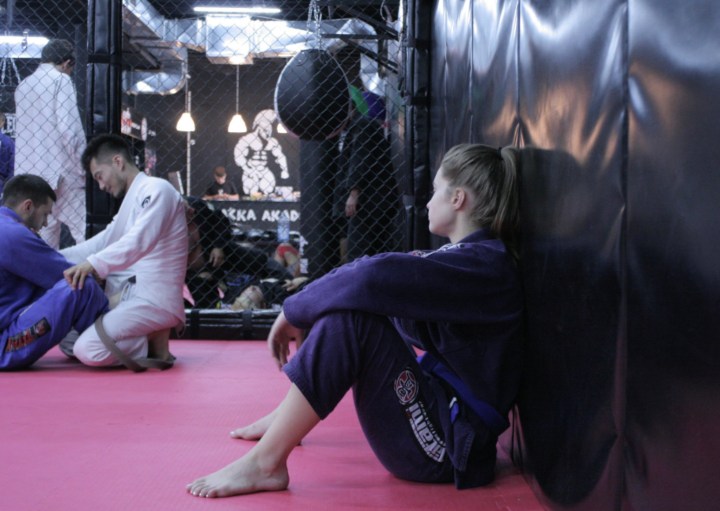 Why won’t the instructor promote them? Every instructor has their own set of criteria and maybe the students doesn’t fulfil them yet. Progressing through the ranks in Jiu-Jitsu is a long, long process and students should focus on improving, instead of being obsessed by belts.

Let’s look at the case of Mike “Spider-Ninja” Bidwell who is a BJJ Black Belt under Phil Migliarese and Ken Kronenberg (Team Tai-Kai / Balance). Incredibly, Mike was a BJJ brown belt from 2001 to 2014! His path from brown to black belt was an incredible journey. Mike had gained a lot of weight and made some life changing decisions and changed for the better with the help of Jiu-Jitsu.

Let’s look at some of the reasons why instructors won’t promote their students to the next belt level even though they have been training for years:

Sandbagging is a term used in martial arts to denote a practitioner who competes at a skill-bracket deemed less rigorous than their actual level of competitive ability. The term is adopted similarly in golf and various forms of racing. In contrast to these sports however, it remains unclear whether the grappling “sandbagger” necessarily does so intentionally. For example, in Judo or Brazilian Jiu-Jitsu, where competition is generally divided by belt rank, a practitioner is conventionally not allowed to choose his or her own ranking and thus must compete at a level predetermined by his or her instructor. In this case, the instructor doesn’t promote the student on purpose because they want them to rack up the most medals possible at their current belt level.

Sometimes sandbagging is not the instructor’s fault…At one academy where I used to train, there was a guy who had been training sporadically for 8 + years and he was still a white belt…He had the skill set of a brown belt. Rolling with him was never easy, but he had a mental block and didn’t want to get promoted. Every time, the instructor would bring up the blue belt promotion, he would feel pressured and would disappear from training for months, only to reappear once the ‘tension’ had died down. This went on for years.

He became so infamous at the academy that we used him as a prank. Every time we had a visiting upper belt, we would match the 8 year white with them. It was always hilarious: “Man, I don’t know what’s wrong with me?? That white belt tapped me out 3 times…Does he have a Judo background or something?” To which we would answer: “Hey, you’re in Eastern Europe. Even our white belts are hard rolls.”

Solution: If the instructor is ‘sandbagging’ you in order for you to win as many medals as possible in competition, that means that you are a great competitor but maybe other parts of your Jiu-Jitsu game are lacking: humility, helping teammates, other parts of game need to be worked on. You should ask your instructor what you need to work on the most, and proceed to change ASAP.

A big No No in Jiu-Jitsu is to openly ask your instructor for a belt. It raises a massive red flag for your instructor who can actually start to think that you are only interested in being promoted so you can brag about your level in BJJ instead of being interested in the other important aspects of the art. There are several cases in which people keep training just to acquire that desired promotion and after that they completely disappear from the academy. At the end of the day what you should do is to enjoy the ride and absorb as much knowledge as you can, because once your pass this specific stage you are not coming back there.

As an instructor, when I get a new student, I will always be sure to put them in the right path. That means to make sure that they have the right mentality. In my academy, if you have a big ego, you will have a bad time. I have seen young champions that started winning everything and their instructors were never able to keep them humble and next thing you know, they start becoming full of themselves and arrogant. That’s why I would never promote anybody to the next belt unless they have the right attitude. You can win the worlds, but if you’re a bad person or arrogant, you’re staying where you are until you change to being: humble, positive, perfect teammate, example to lower belts.

Solution: Work on your personality and be less selfish and egotistical.

-You constantly make the same mistakes

Bad habits should be neutralized right at the start. Your coach isn’t bothered by correcting your mistakes one bit, but when it becomes clear that he gives you advice on how to perform a technique and you keep repeating it time after time it can mean only one thing, that you are not paying attention at all to what he says. Yeah sure, you might think your coach doesn’t know how it feels to roll with your body and what feels more natural to you, but well, who is the coach there? You can be sure that he took a long road to earn that black belt and that you aren’t the first person he has ever had to teach something to. If he is telling you to do, try or correct something, listen to him, it’s the voice of experience giving you advice right there. Doesn’t it feel natural? Well, I’m sure it didn’t feel natural at all to you on your first class when you had someone mount and smash you but now you can easily deal with it, with exactly what your coach showed you to do.

-You just do No-Gi

First of all, what do you want a belt for if you don’t even value the training in the Gi? Helio Gracie already said that the belt is only to hold the Gi jacket closed and if you didn’t know, at the early days of Brazilian Jiu-Jitsu there were only white, light blue and dark blue belts being used. Later on the belt system we have in use nowadays was adopted to differentiate the students in level and proficiency. The moment you decided to train Brazilian Jiu-Jitsu you accepted to train it by its rules and even though there is the No-Gi part of it the Gi is fundamental for you to keep going forward in the art. If you do No Gi, then you don’t need a belt. Wrestling doesn’t have a belt system for example.

Solution: If you prefer to do just No Gi, then that’s fine and great, just do not expect to be receiving a belt (which you don’t even need). You can also can train under the 10th planet No Gi Jiu-Jitsu system or Luta Livre which have a belt system.

-You don’t train enough / are not regular enough

There are some people that will train for a month and then disappear for half a year before coming back again. Being regular in your BJJ training is so important in terms of progressing. One of the things that you need to get to the next level is obviously for your instructor to see that you actually are applying everything that they have taught you and of course to be able to apply it in a real situation, which in this case is rolling with other people of the same level. A belt promotion comes when you are able to demonstrate a specific set of skills required to obtain the next belt, if you cannot demonstrate it there is no way to have you evaluated.

Solution: Come to class as much as possible. Minimum 3 times a week to progress properly.

-Too much strength, not enough technique

This one goes completely against everything that Jiu-Jitsu preaches, starting already by doing the complete opposite of that the own translation of the name Jiu-Jitsu means, “Gentle art”. The whole concept of Jiu Jitsu is based on the efficiency in which a smaller and weaker person can submit and dominate a bigger and stronger opponent with the use of leverage and specific techniques, so obviously trying to match the strength of a stronger guy already defeats the purpose of the art.

Solution: Imagine that your opponent is 30+ lbs heavier than you. Would that technique that you muscled work against them? Start rolling lighter and slower and using more technique. Your technique will improve, and your instructor will notice your improvement.

-Not competing enough or not at all

Some instructors require their students to compete and to be successful at it. Yes, Jiu Jitsu is a martial art but it is also a sport, which means that part of the game includes competing. Competition also falls into the category of testing your abilities in a real scenario against opponents that prepared themselves to face you and everyone else that might happen to cross their path on the mats. It is in competition that you represent your academy and support your mat brothers and sisters who are also putting their abilities to test but one of the most important aspects of all is the gain of experience and learning how to control your emotions under pressure being able still to take decisions efficiently. Its not only about winning or losing. I firmly believe that everybody should compete at least once in their lives. Competition is not for everybody but you should at least try it. Who knows, you might just like it!

Solution: Sign up for the next competition. Set a goal, train hard. Go for it and have fun!

This person is often jumping from academy to academy, for various reasons. It can be because they didn’t like the vibe at the old academy, or because ether felt that they could improve more at the new academy. Many instructors will want to know what kind of person you are, how dedicated and how much love you show for Jiu-Jitsu. At the end of the day, when your instructor puts a belt around your waist you are, in this case, a blue belt under him. So not only your techniques but also your behavior and character will reflect what you have learned and absorbed from your instructor.

Solution: If you are new and have been gym hoping before that, make sure to explain your reasons for your past ‘instability’. Just keep a low profile, train hard and let the instructor and teammates’ trust you slowly but surely.

Of course it is good to have a ‘go to technique’, that one that you are so good at that even higher belts fear when you start it’s setup, but is also can mean that you are not focusing enough on whatever else your instructor is teaching you. It can be a strong signal that you are basically ignoring him or not paying enough attention to what he is teaching at a specific day or week just so you can still focus on working only on that specific technique you decided is the best for you. Imagine that you are really amazing at a certain submission and works only on it, what happens when you face a certain guard you cannot pass? Keep that in mind.

Solution: Be more well rounded but still have a good ‘Go To move’.