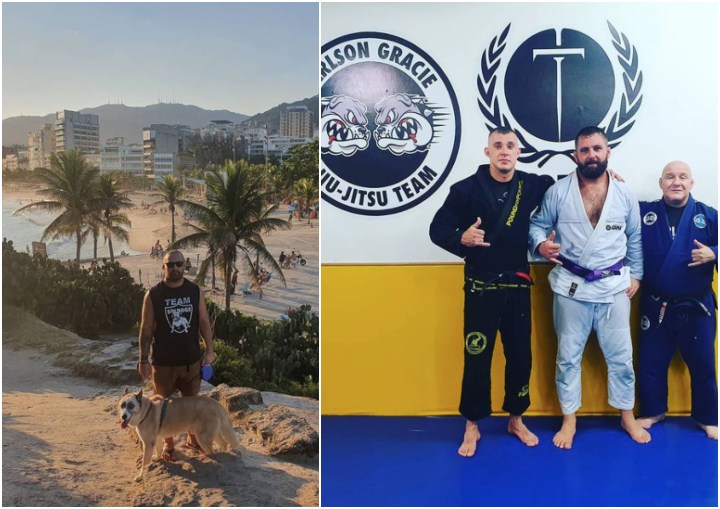 Probably most of you reading this have been to padded rooms where there is a man with thick accent, an exotic name like ‘ricardinho’ teaching something. He (or she) is wearing a cloth fastener he refers to as his ‘black belch’ leading a strange tradition where the devotees chant ‘oss’ as a way to glorify their deities. Rumor has it he’s from a country where this tradition is extremely popular – It’s Brazil. Brazil is the mecca for any acolyte of this kimono wearing cult. A pilgrimage to Rio De Janeiro for serious Jiu Jitsu practitioners should be like the Hajj for Muslims: an obligation rite if you have the means to do so.

The most obvious reason to go to Brazil is because the training is really good. There are very few places on this planet where you’ll be able to step into a dojo and find 10+ blackbelts rolling on any day. Where many of the purple belts are 20 years old and they’ve been training since they were 10 – the talent pool is so deep and dangerous. The only closest comparison would be San Diego but you’re missing the point if you’re going to travel to the USA and avoid the cultural aspect of Brazil. Tournaments are held sometimes 2-3 times a month in Rio so you can be super productive on a short trip, or spend months grinding out tournaments and leveling up.

The author, in Brazil:

Go at any skill level – shouldn’t be self conscious of your jiu-jitsu, Brazilians understand there are competitors and casuals. Likewise you can always leave Brazil a better athlete than when you arrived in Brazil. While you should certainly honor your roots, you should see all the gyms that helped create the culture of the sport. Gordos – the man responsible for the half guard, Gracie Kore, De La Riva, GFTeam, Checkmat/Fightzone, RFT, Nova Uniao among others – Alliance in Sao Paulo as well. The entire country is rich in good training. I personally love Traditional Jiu Jitsu School in Florianopolis led by the absolute legend of the 2000s, Alexandre De Souza.

Plus, it’s an optimal place to relax. The beaches are great – the country boasts 23,000+ kilometers of coastline to enjoy. Walk out of training at checkmat, grab a Caiprinha and swim in Copacabana beach. How many gyms in the world can you walk out of training, have a cocktail in your hand and be on the beach within 5 minutes? At Carlson Gracie Totti’s at the edge of Copacabana/Leme and Morro da babilônia Favela is situated in a community sports center where the 2nd floor is a Capioera hall; so when you are rolling you hear the sound of african drums and the sounds of motorbikes zipping by, it has a very authentic Brazilian feel.

Unfortunately, we should talk about security. Brazil, in general has it’s fair share of security related issues. If your primary concern is security, I highly advise you to go train in the South of Brazil. That being said, all of the people I know that were robbed in Rio de Janeiro were presenting themselves as targets of opportunity though – walking home at 4 AM and drunk. You can easily avoid most of your problems in Brazil but it shouldn’t be your first trip abroad, it’s not as easy as a place like Thailand. I strongly recommend learning some Portuguese before you leave.

I left for Brazil in November 2020 and I’ve been here since then. I first went to florianopolis but my airbnb was too far from the training and the high season prices of the island were pushing the boundaries of my budget. I wasn’t able to train a lot. I arrived in Rio In February and I picked up the intensity of my training. I am a 34 year old purple belt and in 3 months I managed to do 4 tournaments, one of which I won Gold @ Heavyweight absolute for masters. I will remain here fore a few more months – if you are interested in the journey, check my Instagram @BJJmercenary