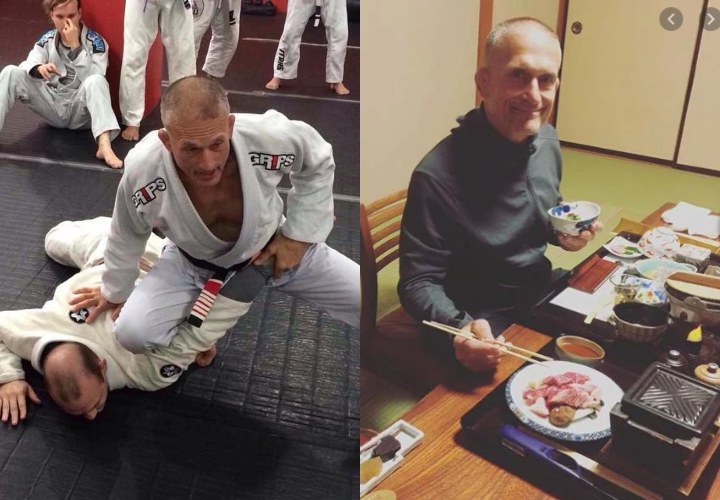 “If You Want Longevity, Do Gi Jiu-Jitsu” Chris Haueter

My first year training was 100% in the GI. Then after I received my blue belt I tried my first no gi class. I was instantly hooked. The speed, the lack of grips, the submissions without the cloth, all of it gave me a sense of being closer to pure combat. For the next half of a decade I kept my Gi’s hanging in the closet. That was all in my 20’s, but now that I’m approaching 40, my preference has shifted. Lets forget about the battle of which is better, Gi or No Gi, they both have their pro’s and con’s. Instead lets look at why training more in the Gi allows the older guys on the mats to stay competitive.

One of the first things you notice when going from Gi to No Gi is the speed of the movements. The scrambles and explosions are as intense as a tornado sometimes. Though there are ways to control your opponent with body locks, over hooks and under hooks, the lack of friction without the Gi makes it a bit easier for them to slip out of your control or your submissions. With the Gi, your grips along with the friction makes it a lot easier to slow your opponent down to the pace you want or need.

The Gi also allows for a far greater arsenal of attacks. Paper cutter chokes, bow and arrow chokes, collar chokes are all great options that only work with the Gi. And What’s nice about techniques like these is the fact that they require far less athleticism compared to the No Gi techniques such as the arm triangle, Kimura, knee bar and leg Triangle, because the older you get the less you can rely on physical attributes and choosing techniques that require almost no athleticism allows you to roll competitively and be a threat with the younger stronger teammates.

And have you ever tried doing takedowns No Gi with a fast young guy with good wrestling? Not fun, because sometimes their shots are far faster then your reaction time to defend. Going against a bigger guy also makes you hesitate to risk getting stuck under their weight from a failed double leg. But with the gi, breaking their posture gets easier, slowing down their speed and evasiveness becomes doable and the takedown options go beyond the classic Judo and wrestling.

With the Gi you can control the takedown game much easier, on the ground you can slow the pace to match your speed as well as controlling your opponent with more ease. The submission game also expands greatly while using the lapels and collar all while using less energy and strength. Do I think we should all still train No Gi even when you pass middle age? The answer is yes. It does make it trickier and harder to keep up with the young athletes coming up through the ranks, but it’s still doable and to make our game complete we should always train both, but you might find yourself showing up a little more often for the Gi classes then you used to when you were young.