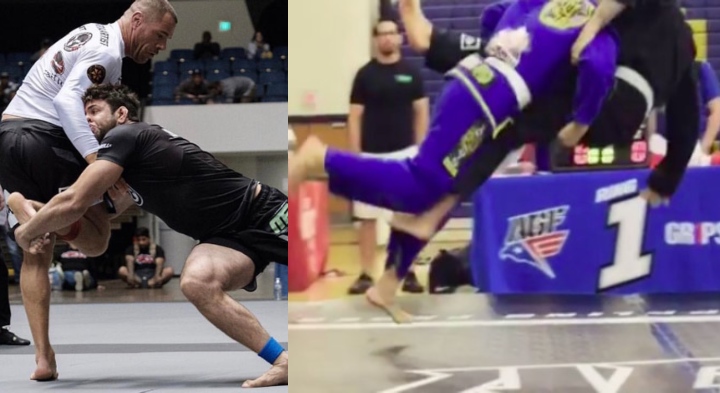 Are you looking to improve your takedown game in Jiu-Jitsu… But you’re not particularly good at taking people down to begin with? You might not have too much talent for takedowns, so you’re looking for a fairly easy option that will send your opponents flying?
Then the Blast Double Leg should be your #1 takedown of choice. Here’s why.

The Blast Double Leg takedown isn’t too technically complex. It has just a few basic components that you need to remember and then drill into your muscle memory: acceptable (arm-length) distance, level change, the „shot“, hitting the middle of the opponent’s chest with your forehead, wrapping your arms around their hamstrings and pulling them towards you… And blasting through them, of course.

Sure, it’ll take you some time until you get all of these things right, and until you can tie them together into a coherent whole. But this technique is a whole lot simpler than much of the other ones are – go get it!

ACHIEVABLE EVEN FOR TALL, RIGID ATHLETES

A lot of rigid and/or tall grapplers have a problem with setting up takedowns. Even the „regular“ Double Leg can be a problem, mainly due to the level change – it takes them a looooong time to drop into position.

The Blast Double Leg is much more forgiving in this regard. Your level usually doesn’t have to be as low as it would be for the normal variation. Additionally, you’re not going to be taking a penetration step! Instead, you will bend your knees to get in an explosive stance; and then you’ll just explode out of it.
You certainly are still attacking both of the opponent’s legs with your hands, make no mistake about that one. But in this instance, you are pulling their legs straight into you.

Blast double leg in the Gi:

One of the absolute worst things that can happen to you in a match is going for that takedown early… Only to be caught in a Guillotine Choke – be it because of your poor posture, of your opponent’s skill, or both. The reason doesn’t matter in the end, because you’ll tap (or nap).

If you are a person with a lengthier neck and you simply have a harder time keeping that head up and your back straight when going in for a Double Leg, then you should drill more Blast variations. By keeping your forehead to the inside, against the opponent’s chest (in a punch-like fashion), you’ll greatly minimize the chances of getting choked out.

The Blast Double Leg is one of those techniques that work on everyone, not just on white and blue belts. As long as you get your timing and technique right, you will take your opponent down in a spectacular fashion!
Doesn’t matter what color their belt is. Drill your „Blast“ and make sure to commit to it… And hey! There is yet another, bonus piece of advice: never hesitate when going for a takedown. That moment of hesitation will surely ruin your attempt. So, even if you’re unsure of your technique, go for it and do not stop until you either fail entirely or fail miserably.

FINALLY USE YOUR STRENGTH!

You may be tall and rigid, or your technique (in general) may not be all that refined… But hey, do you know what you’ve probably got? Strength and explosiveness!
Now is the time to use them, as the Blast Double Leg relies on those two components by a substantial amount.

If you want to learn how to set up this takedown, watch this video below: