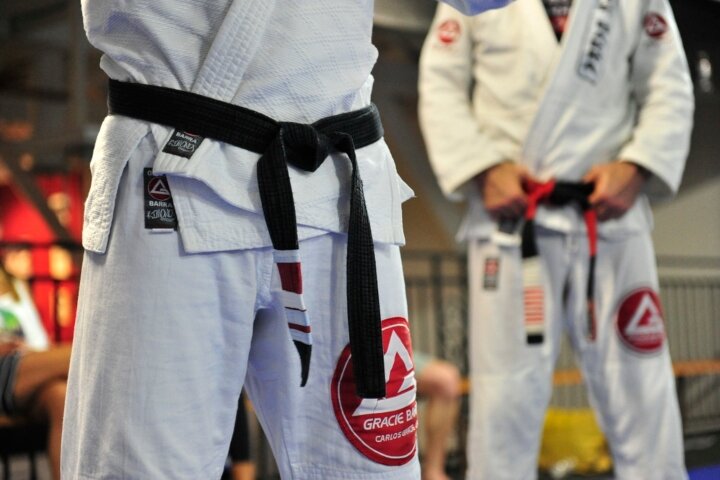 Most Brazilian Jiu-Jitsu students who become black belts will achieve that in 10-15 years of training… But there are some exceptions to that “rule”; people who get promoted to the black belt rank in as short of 4-5 years!
Kit Dale is one of them. But how did he manage to do it?

In his own words, it’s “got little to do with the genetics and everything with the way you train Jiu-Jitsu”. He shares an analogy to better explain what is meant by this:

Let’s say you’re in maths class, it’s your first day and you have no idea what you’re looking at. You have an equation in front of you, and you have to solve it… So you look at little Jimmy next to you and you see that he has some answers.
You look at him and think: “Man, it looks like he’s pretty smart.” And so you copy his answers.

And you do that until the end of the day, you give the sheet to the teacher and she says: “Where’s the working out (of the solutions)?” And you just say: “It’s up here (gesticulating to your head).”

But when the test day comes, you don’t know how to actually solve the equation:

Kit explains that this is how most people learn BJJ – which is what keeps them away from their black belts for so long:

And then it comes to competition or free rolling. The new position comes up – you’ve never it. And you’re sitting there, looking at your coach to tell you exactly how to do it, but you don’t have enough time to rep it a 1000 times… And you lose.

Dale explains that, if you’ve learned the formula behind the equation instead, you’d be able to solve this – and many other problems with it. Which is why he puts so much focus not on the “what” his students do, but “why” they do it. And why it’s so important that you learn through trial and error:

When you learn through trial and error, it means that it (learning) is alive and real. And when it’s real, you stress and you get excited. You get scared. And when you’re emotionally aroused, that’s when you learn best.

Watch the video below to hear more of Kit Dale’s thoughts on this, different way of learning things: