Why Clinch Takedowns Can Be Superior for BJJ 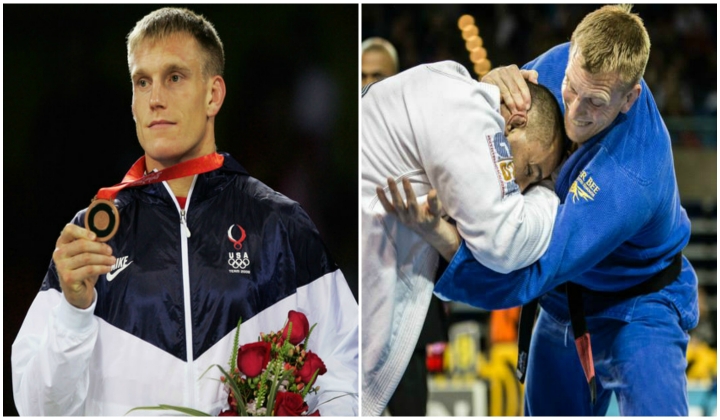 The biggest problem a BJJ guy usually has is nailing the actual takedown to bring the fight to the ground. Once you have a good wrestler or a fighter with great distance management, well sometimes that sprawl is too good to get by. The energy expenditure is insane, you usually end up on bottom when the attempts fail, and your often open to getting a devastating knee to the head while coming in. There is an alternative though, takedowns from the clinch.

If you watch a boxing match, even when striking is the only tool being used, the clinch naturally happens. That’s why a boxing ref spends over half the fight separating the two contenders from that position. What is nice about getting the clinch is that not only does it naturally happen without being forced, but it takes far less energy expenditure to obtain and leaves you with less risk of getting caught from a strong kick or knee to the head upon entering.
When an opponent shoots in for a takedown, their options are a bit limited, single leg, double leg and maybe an ankle pick. All of which are predictable and can be defended by the same reactionary movement, the sprawl. But when you are in the clinch, not only can you still drop for the lower leg takedowns, but you now have a plethora of judo throws and leg sweeps put into the mix. Just having that large number of takedown options can overload your opponents defenses, because the easy sprawl does not stop that arsenal so easily.

Not only does the clinch offer more takedown options, but it also gives you the ability to change the direction of the takedown. In the clinch you are able to take your opponent down in the directions of north, south, east or west. Fighters are conditioned to put their legs and hips back to avoid their legs from getting grabbed, but that leaves them open for the hip throws which bring them to a south direction takedown. Foot sweeps and leg drop takedowns take them east or west and reaps, rear, or leg takedowns take them north for the fall. They simply can’t defend all the directions at once.

Damian Maia has had some pretty solid success with his traditional single and double leg takedowns, but during his two title fights and a few others, he struggled to land one, with shot after shot sucking the energy out of his body. But when he clinched in the open mat or against the cage even against top wrestlers, the takedowns always came because the options opened up. He either did leg hook takedowns, fall back takedowns and he even pulled a tight guard now and again, which is another option to employ. When he expanded his options by simply getting to the clinch, the game changed.

It’s time to bottom line this. If you want a takedown game that has more options, more combination possibilities, guard pulling setups, less energy, less predictability, all while leaving you less vulnerable against the power shots, then maybe putting a little more time and tactics into the clinch game is the answer. Most of the old school BJJ takedowns happened in the clinch. Rickson and Royce doing the body folding and leg hooking were the takedown techniques of choice, lets not throw those options away.